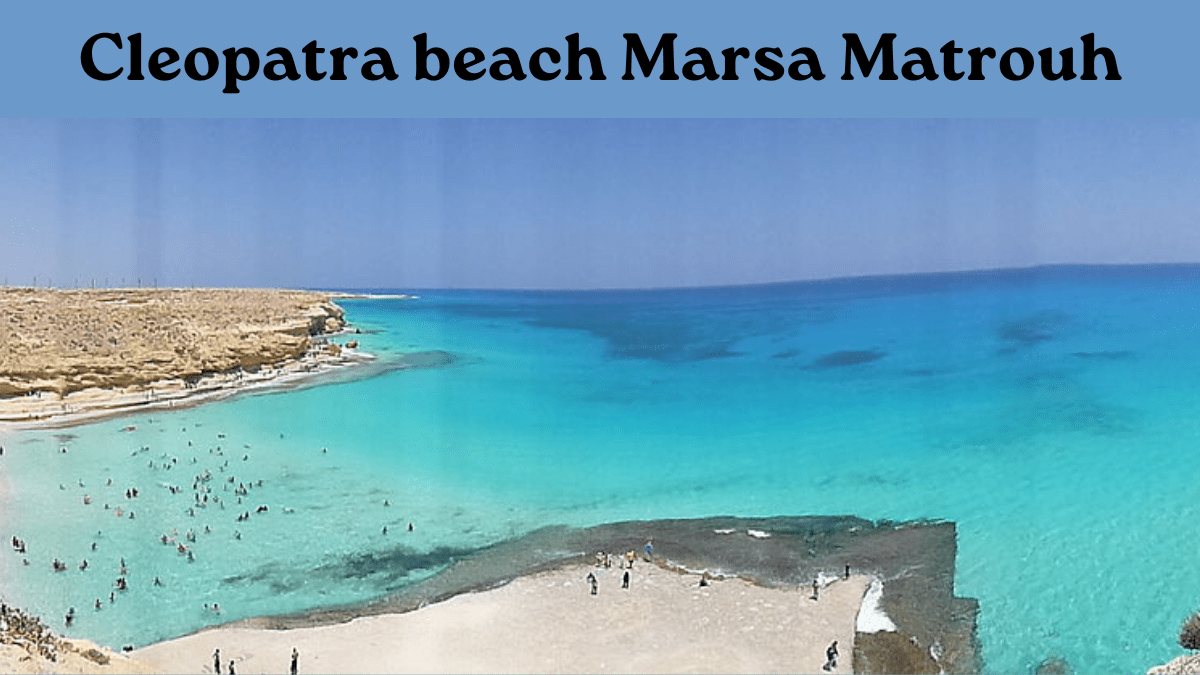 Egypt has many tourist sites that attract tourists from all over the world, Cleopatra beach Marsa Matrouh is one of them. Not only does Hurghada, Sharm El-Sheikh, Giza, Cairo, Luxor & Aswan have touristic features but also Marsa Matrouh governorate has many attractions.

We will tell you in this article about one of the best beaches in Marsa Matruh which has witnessed one of the most famous love stories in history which are Cleopatra beach Marsa Matrouh.

Its location is in the northwest of Egypt and the Mediterranean Sea is in the north. In addition, it extends south of Siwa Oasis for more than 400 km. then south Siwa Oasis is Giza and the New Valley Governorates, to the east by the governorates of Alexandria and Beheira, and to the west by the city of Salloum on the Egyptian-Libyan border.

Cleopatra beach is the best beach in Marsa Matrouh as it has many natural features. It is located in the northwest of Marsa Matrouh City at about 5 km.

Her nickname was Cleopatra VII, as there were six queens before her with the same name. However, she is the last Queen of the Macedonian family from the dynasty of Alexander the Great. In addition, her reign was after the death of her father, Ptolemy XII, in 51 BC, she reigned equally with her brother, Ptolemy XIII. Moreover, she had many disagreements with her brother until he expelled her from Egypt. But she took advantage of Julius Caesar to return to rule Egypt, and indeed she returned to Egypt, and her reign was very prosperous and stable. The Egyptian people loved her due to her honesty and justice. In addition, she was assembled by the Egyptians as the new goddess Isis.

She was distinguished by her charming beauty and intelligence. In addition to the fact that she spoke more than nine languages. She gave birth to Julius Caesar, her son, Ptolemy XIV Caesarion, but he didn’t announce this until he died. A great love story arose between her and Marx Anthony, to the extent that she committed suicide after learning of her suicide following his defeat by Octavius ​​and his entry into Egypt.

As we have just mentioned that Cleopatra has a great love story with the Roman leader Marcos Antonio, thus this beach witness their love during that time of history. Besides, she used to take care of her beauty and we can see that in Cleopatra’s baths near this beach. Moreover, some historians believe she used to take another bath in milk to keep her skin shiny and healthy all the time.

So, this beach was named after Cleopatra, however, there were also monuments of the ancient Egyptian Pharaonic civilization as well. Thus, Marsa Matrouh has a great ancient history that passed through its nature.

How is the weather on Cleopatra beach Marsa Matrouh?

Summer in Matrouh is wet and dry, while August is the hottest month in Matrouh. The maximum temperature rise may reach 29 degrees Celsius.

While the winter in Matrouh is characterized by cold and clear weather at the same time and January is the coldest month of winter in Matrouh, and the temperature may reach a maximum of 10 degrees Celsius.

Spring in Cleopatra Beach, Marsa Matrouh, is characterized by warmth and brightness, and rain is rare

Autumn is one of the months when the sun is not strong and light rains fall.

What is the area of Marsa Matrouh city?

The area of Marsa Matrouh city is 161 thousand km2

The population of Marsa Matrouh

Its population is 2.9 people per square kilometer.

Where the picturesque nature, you can relax from the burdens and pressures of life by contemplating the renewed waves.

2. Exploring the tunnels and archaeological carvings

Cleopatra Beach has a long history that goes back to the era of the pharaohs due to the discoveries of very old tunnels and distinctive rock formations. And also historians discovered its link with an ancient Pharaonic palace.

As we mentioned before, Queen Cleopatra was interested in her beauty, so she was keen to take a bath in seawater without anyone seeing her. So now this place has become a place for many locals and tourists to enjoy it. In addition, there is also transparent odorous glass myrrh connecting the beach with Cleopatra’s Baths. And on its sides, you will find wonderful waves and clear water.

Marsa Matrouh city has more than 22 beaches, the most famous beaches of them is:

Cleopatra Beach has many advantages that make it the best beach in Marsa Matruh, such as:

Other beaches named after Cleopatra

Cleopatra ruled Egypt for twenty years, so she has many monuments. Of course, in Alexandria, where Alexander the Great founded it, there is a beach called Cleopatra Beach in Alexandria. Not only that but there is an entire neighborhood in the name of Cleopatra because of her impact on the history of Egypt.

Cleopatra became famous during her rule of Egypt because of her cunning and intelligence, as well as her ability to persuade. Not only that she was famous for her unparalleled glamorous beauty. Therefore, neighboring countries were affected by it, such as Turkey, which has Cleopatra Beach Turkey.

In the end, Egypt is still full of many tourist attractions, whether it is the picturesque nature or its ancient history of it and its significant historical events. It not only includes the pyramids and the temples of Luxor and Aswan, but there is a lot in all governorates of Egypt that attracts tourists.