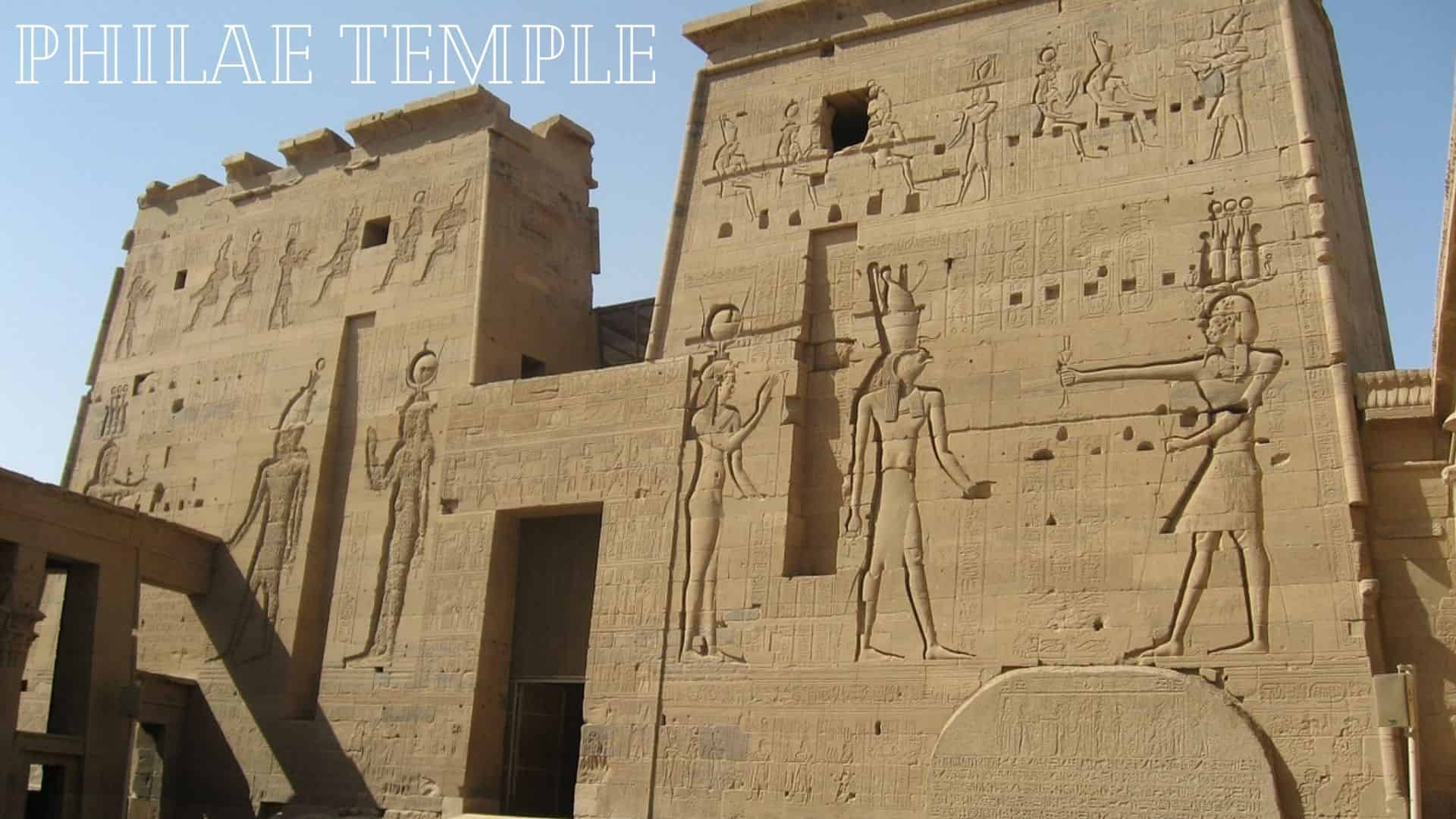 Egypt has many fascinating historical sites that tourists from all over the world visit and enjoy its sites and monuments, Philae temple in Aswan is one of the most important sites. Not only Giza pyramids and Hurghada are touristic sites, there are many temples in Luxor and Aswan in Upper Egypt. However, the Philae temple has a great history that we will talk about in this article.

When was the Philae temple in Aswan built?

In the same place as the current Philae temple, King Nakht-Nepf in the fourth century BC built a huge temple, and after him in the same place, king Ptolemy Philadelphia in the third century BC built his great temple. As he wanted the Egyptian people to love him like in the Egyptian pharaonic civilization, so he showed them that he believes in their great gods. As many kings made the same and pretend to be the son of the Ancient Egyptian gods as Ancient Pharaohs used to do ceremonies for that.

Where is the Philae temple located?

The location of the Philae temple nowadays is on Agilkia island in the middle of the Nile river in Aswan. However, earlier its location was on Philae island and later UNESCO transferred all the Philae island buildings to Agilka. The high dam constructions affected it as it was about to sink.

Its location is distinguished among other temples because of its nature and isolation from the modern constructions between the water. In addition, the Philae temple is near Aswan where you can visit other temples. Don’t miss this chance.

How to get to the Philae temple?

It is on agilika island in the Nile River near Aswan. So you can take a taxi from Aswan to Philae temple Marine. There, you will find many boats for transferring visitors to Agilika Island where you can enjoy your time with the great historical site of the Philae temple.

Philae is a Greek word that means “beloved”. It has another Arabic name “Ans Al-Wugud” as it has a strong relationship with many cultural stories.

During the Ptolemaic era, like any invader in Egypt, the kings tried to involve the Egyptian people by believing in their Egyptian Gods such as Isis, Osiris, and Horus. Therefore, Ptolemy II believed in the Egyptian God Isis and ordered to build Philae temple to the sacred Egyptian Goddess Isis.

The rescue of the Philae temple

After building the high dam of Aswan, the Philae temple was about to sink as the water covered about of its walls. However, UNESCO made a great project to rescue this great monument from sinking.

In 1972, its resurrection was really amazing as first the workers cut the stones into many pieces each piece was up to 30 tons with an average of 20 tons. Then they transferred it to Agilica Island. Agilica Island is about 500 m far from Philae Island. After that, they put their parts together again. This entire project took 2 years “The Rescue of Nubian Monuments and Sites“.

It is one of the greatest works in archaeological engineering as the workers installed 3000 steel plates at the bottom of the Nile at a length of 12 meters to form a temporary dam to retain water around the island, so it took two years to save the entire island to surround the island with two rows of steel plates.

It was dedicated to worshiping the great God and Goddess Isis the main god of the temple. Besides Osiris and their son Horus. You will see that the walls of the temple show us their myth of them. One wall shows Isis bringing Osiris back to life and then she gives birth to Horus. Besides, in another scene, Isis is mummifying God Osiris after his death.

The temple architecture is great as a great corridor was built. In addition, it is decorated with Corinthian pillars that have made it one of the great architectural sites. There is also a birth chamber for Isisi where you can see on the walls a scene of Isis breastfeeding Horus.

There is also a small temple beside the Philae temple. It was dedicated to the worship of God Horus which was built by Ptolemy V.

Later in the roman other constructions were built such as the roman temple for King Trajan. It shows scenes of the king presenting wine to Goddess Isis and God Horus and presenting incense and the sacred water to God Osiris.

In the Sound and Light show Aswan, the Philae temple will be brought this magical temple will be brought back to life, especially the Egyptian Gods and Goddesses. This significant temple is the most popular tourist spot in the 18th and 19th centuries. Enjoy an exceptional journey at the Philae temple Sound. And also Light show, which will steal your heart by revealing ancient secrets and mysteries.

You can check more from this link Sound and Light show.

Temples between Luxor and Aswan

If you are planning to visit Luxor and Aswan, you must take a cruise between them. So, you can enjoy the natural scene with the temples. It really worth visiting, you will find other historical monuments such as:

There are many temples in Aswan such as:

In conclusion, the Philae temple in Aswan is worth visiting as it is one of the great monuments that have amazing construction. Besides nature and the Nile River that surrounds it. Thus, it is like an amazing picture that you will enjoy visiting. Don’t hesitate to visit it as it’s a fantastic adventure.