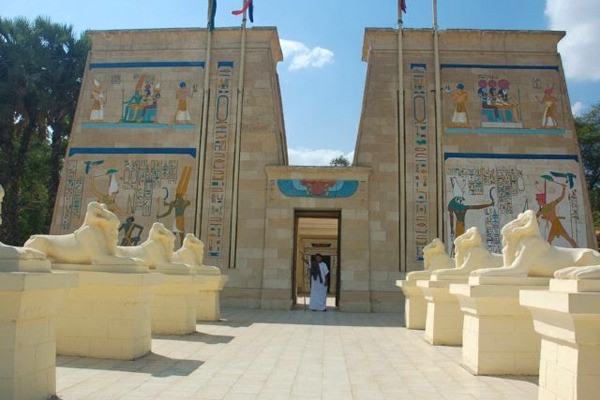 The city of Cairo is a wonderful place where many tourist, recreational, cultural and historical places meet. It is considered one of the most important tourism cities in Egypt. It is famous
for its popular atmosphere and nightlife, where cafes and the Corniche are teeming with
visitors coming to enjoy watching the Nile in the evening.

Cairo Egypt embraces many tourist areas in Cairo, which attracts many tourists to it annually from all over the world, and we will mention to you the best tourist places in Cairo attached to the most beautiful pictures of Cairo:

The Pharaonic Village in Cairo

The pharonic village is considered one of the best tourist places in Cairo, Egypt. It is an ideal place to learn about the Egyptian history and the civilization of the pharaohs and discover the lifestyles that were prevalent in those eras. The Pharaonic Village simulates the ancient villages of the Pharaohs that were present thousands of years ago, where you can learn about their contents, landmarks, buildings and even their characters.

Abdeen Palace is one of the most famous and best tourist places in Cairo. It is undoubtedly
a wonderful historical architectural masterpiece built during the rule of the family of
Muhammad Ali Pasha of Egypt, where at that time the seat of government from 1872 until 1952. This palace witnessed important events From the era of the Queen until the July 1952
revolution, which was the beginning of the emergence of modern Cairo. The palace has been converted into a museum visited by thousands of tourists when visiting Cairo.

Pyramids of Giza in Cairo

Giza Pyramids giza pyramid complex is located on the Giza plateau in the Giza governorate
and is one of the most important tourist places in Cairo, Egypt, on the west bank of the Nile.

It includes three pyramids of Khufu, Khafre, and Menkaure, which were built about 25 centuries BC. They are royal tombs, each bearing the name of the king who built it and who was buried in it. The pyramid building here is the stage of development of tomb architecture in ancient Egypt.
The pyramids are characterized as one of the most important seven wonders of the world, one of the biggest puzzles, ancient and modern history, and the most important tourist places in Cairo .

The cairo tower provides you with a wonderful view of the city of Cairo, Egypt, with its
landmarks and neighborhoods, as it reaches a height of 187 meters, which is higher than the largest pyramid in Giza. The tower is located in the heart of Cairo on the island of Zamalek in the Nile River. It is located on a rotating platform, which makes it rotate to provide visitors to the restaurant with a comprehensive view of the tourist areas in Cairo .

The Aquarium, located in the Zamalek area in the city of Cairo, is considered one of the best
gardens in Cairo, which was established in the era of the Khedive.
The garden consists of 49 aquariums for various and rare fish. The garden is characterized by the fact that if you look at the ceiling of one of the corridors, you will find it as one among other cavities made by the waves, which are designs that play melodies when the air passes through them, and it is considered one of the best tourist places in Cairo .

The Giza Zoo was established in Cairo in 1891 to be the largest zoo in Egypt and the Middle East, the first of its kind in Africa and considered one of the best places for tourism in Cairo
The park includes many types of animals, including wild and amphibious, such as tigers, crocodiles, birds, elephants, and others, as it is one of the most beautiful tourist places in Cairo .

The Sphinx is one of the most important tourist places in Cairo, Egypt. It is a statue of a
mythical creature with the body of a lion and the head of a human being. It is believed that the ancient Egyptians built it during the reign of Pharaoh Khafre 2558-2532 BC. It is located on the Giza plateau on the west bank of the Nile in Giza in Cairo, and the statue is located In front of the pyramid of Khafre, which is among the pyramids of Giza, this statue and the pyramids around it are considered one of the most important tourist areas in Cairo .