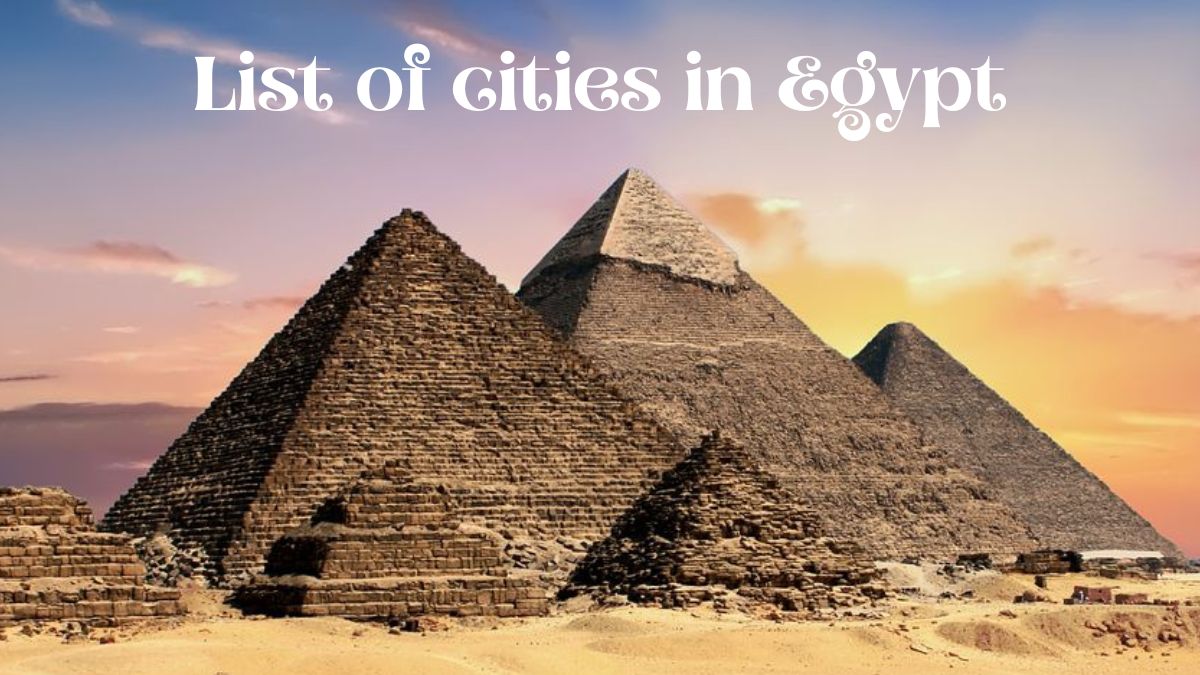 Egypt is one of the largest cities in the Arab world, besides it is the most populated country among the Arab cities, it has many cities that we will tell you the list of cities in Egypt. Besides, there are many cities that you must visit in Egypt to enjoy the ancient Egyptian civilization. Besides, nature and coastal cities are full of adventure with perfect weather. So, let’s talk about the list of cities in Egypt.

Egypt is full of old cities that were inhabited during ancient Egyptian history, Ancient cities in Egypt such as:

Abydos is one of the ancient Egyptian cities, but nowadays it is called Al Balyana in Sohag Governorate.

It is the capital of Egypt for many years and till now been Cairo city.

Memphis was the capital of Egypt and also one of the main ancient Egypt. and also Nowadays, it is called “Mit rahina” in the south of Giza city.

Taiba is Luxor which was the capital of Upper Egypt for a long time, due to the large number of monuments it contains.

It is an ancient Egyptian city that is called now Amarna in the Minya governorate.

It is one of the great cities of Ancient Egypt, but nowadays it is in Helwan Governorate.

It is a famous Egyptian old country. besides, it was located in Al-Gharbeya city. Besides, it was one of the famous cities in old Egypt

Egypt has many cities that have a lot of interesting things to do and visit, this is the list of cities to visit in Egypt such as:

The Great Pyramids are the main destination for millions of tourists from all over the world and also internal tourists. In addition, it has been in good condition till 4500 years old, besides its mysterious conditions about the building and the rooms. Not only that but there are many museums that have many monuments from the Egyptian pharaonic civilization. It is one of the most important cities that you have to visit in Egypt.

Luxor has a third of the world’s monuments, so it is really worth the visit, as you will enjoy the nature and Nile River with its great history. Besides, ancient history is represented in the temples such as the Luxor temple and many other monuments. So, you will never regret visiting Luxor

Aswan is one of the most beautiful cities in Egypt, it is next to Luxor, so you can make a Nile cruise. So, it will be an amazing adventure as you will feel the fragrance of history.

Hurghada is a coastal city that is characterized by its great weather, especially in winter. Thus, many tourists from each city in the world visit it to enjoy the perfect weather with the finest hotels and services.

Sharm Al-Sheikh is also one of the coastal Cities to see in Egypt located in the Sinai Peninsula. In addition, there are many activities and things to do their the clear water and calm weather.

Cairo is the capital of Egypt which has many interesting places to visit and also a lot of activities to enjoy. Moreover, there are many great historical places to visit in Cairo.

Most people think by mistake that there are only three Pyramids in Giza; however, there are more than 100 Pyramids in Egypt. Moreover, it is everywhere in various cities in Egypt. These Pyramids are in the following cities:

There are many new cities which is one of the amazing and advanced cities in Egypt such as:

In conclusion, Egypt is full of great treasures from ancient history; there are many things to do in Egypt. In addition, you can enjoy the great weather, nature and the history which is about 5000 years old. So, you will never regret visiting Egypt.

What are Egypt main cities?

There are many important cities in Egypt such as Cairo, Giza, Hurghada, Sharm el-Sheikh, Alexandria, Luxor, and Aswan.

Where do rich people live in Egypt?

Most of the rich people in Egypt live in the Zamalek district which is considered the best area to stay in Egypt.

What are the 28 governorates of Egypt?