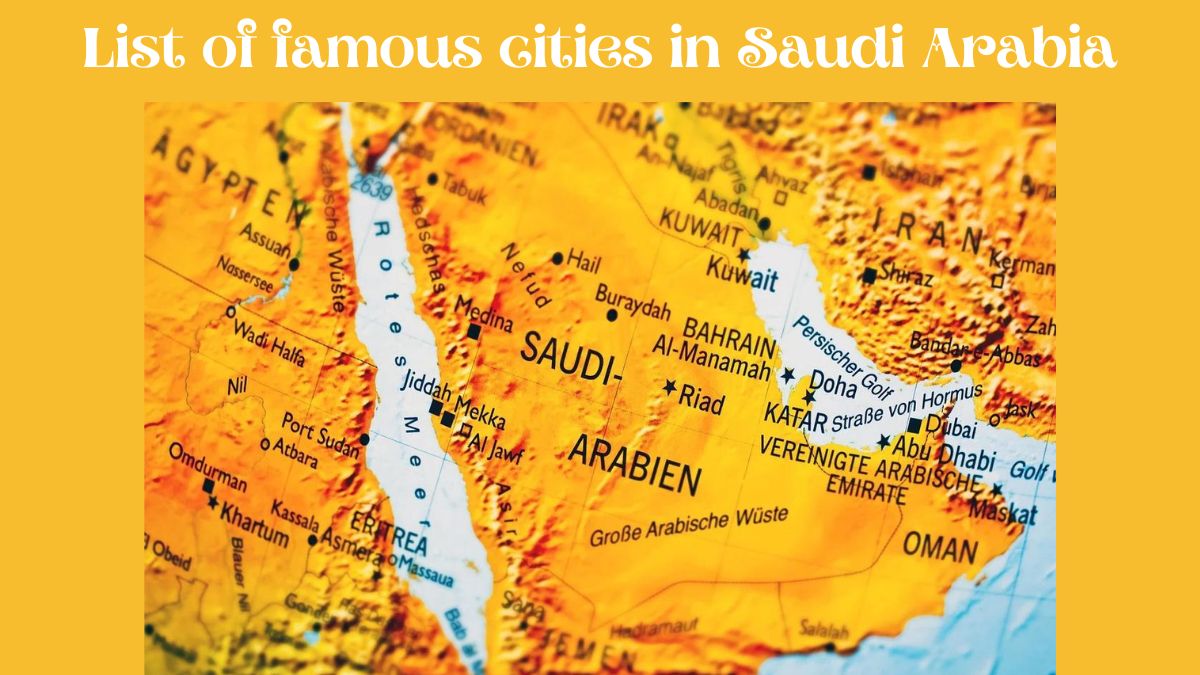 Kingdom of Saudi Arabia is the biggest Country in the Middle East located in the southeast of Asia continental, it is one of the strong countries in the Arab world which has an effective situation in political events, so we will tell you the list of famous cities in Saudi Arabia.

According to 2021 statistics, Riyadh has a population of 10.5 million people. So, it is the biggest third Arab capital country by population.

The location of Riyadh city is in the middle of the Arabian Peninsula on the Najd plateau.

Saudi Arabia has a vast area, so it contains 134 governorates in addition to 46 cities. Among the most important of these Saudi Arabia cities name are:

It is the capital of the Kingdom of Saudi Arabia and one of the most important cities in the Arab world. Besides, many important Arab political events were held in Riyadh which proves its great importance. Moreover, we mentioned its location is in the middle of the Arab peninsula.

It is the second largest city in Saudi Arabia after Riyadh because it has a total area of 84,658 hectares. In addition, it is located in the west of the Kingdom of Saudi Arabia on the coast of the Red Sea. It is the gateway to the Two Holy Mosques, and there is also the largest seaport on the Red Bukhara coast.

It is a sacred city for Muslims, as it has Al-Masjid Al-Haram which millions of Muslims visit for Hajj, and also Umra each year. Besides, its location is in the western part of the Kingdom of Saudi Arabia. In addition, the area of the Holy City of Makkah is about 850 km². In addition, the nearest airport to Makkah is King Abdelaziz airport.

It is the first capital of Islam besides, it is called “Madina Monawara”. In addition, It has another famous old name which is “Taiba” and before Islam was known as “Yathreb”. Besides, it’s sacred because of the existence of the Prophet’s Mosque in it.

It is an important city due to it overlooks the Gulf through three sides north, east, and south. It is also famous for the oil fields in which it was discovered and is still to this day.

It is called the bride of the south because it has the most beautiful nature and amazing views everywhere. Besides, the location of Abha is in the southwest of Saudi Arabia.

Its location is in the west of Saudi Arabia, while it is surrounded from every side by mountains. So, it has the best weather and many come to it to enjoy the summer. Besides, its old name was “Weg”.

It is near Al-Madina and also its location is on the red sea coast. In addition, It is the second biggest city on the red sea after Jeddah city. In addition, it is called the pearl of the desert as it is one of the old cities of Saudi Arabia which is about 2500 years old.

This is a list of famous cities in Saudi Arabia such as:

This is a list of famous cities in Saudi Arabia in each province such as:

This is a list of famous cities in Saudi Arabia with a higher population such as:

Neom is a modern city with about 26,500 km2. Its construction began on 24 October 2017 by Mohammad bin Salman. It is also located in the far northwest of Saudi Arabia and extends along the coast of the Red Sea from the west about 460 km.

In conclusion, Saudi Arabia is playing an important powerful role in many political conflicts all over the world. As, it has the power of Petrol and Gas which are needed all over the world, especially after the war between Russia on Ukraine and its consequences.

What ancient civilization was in Saudi Arabia?

Who was the first to live in Saudi Arabia?

King Abdulaziz bin Abdul Rahman Ibn Saud united the four regions into one State which was founded in 1932. he settled with his family there and ruled Saudi Arabia till nowadays.

What is the oldest city in Arabia?

Madinet Saleh or Hegra is the oldest city in Saudi Arabia.