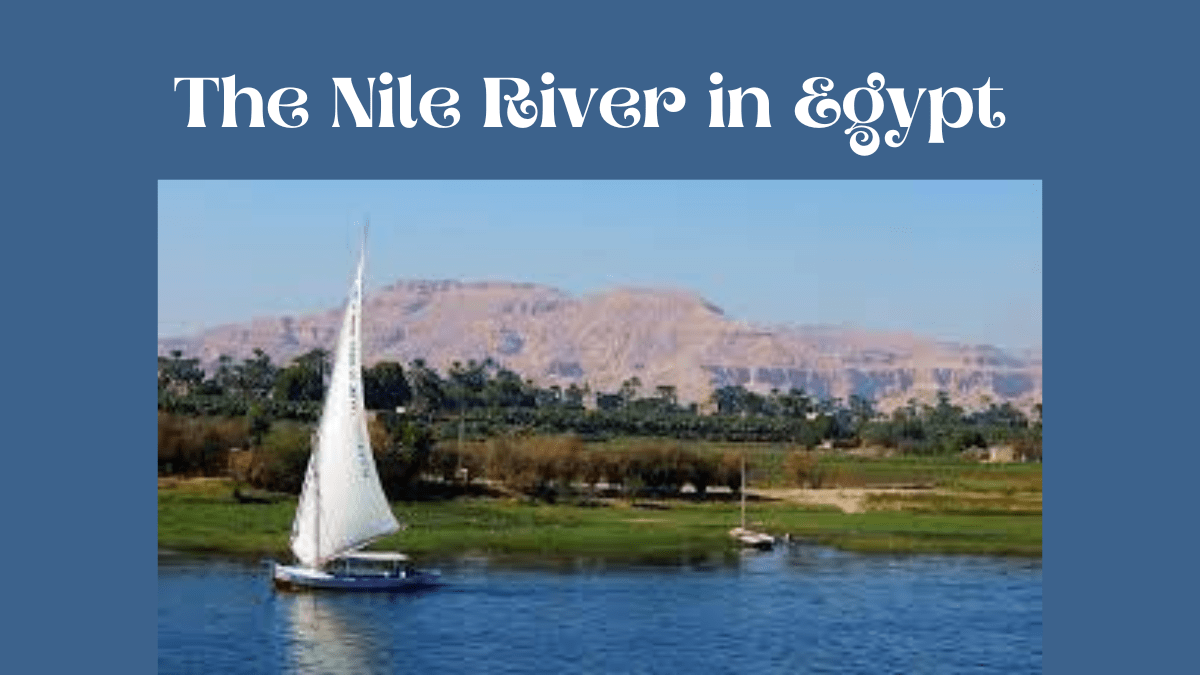 Since the old years, the Nile River in Egypt has had a strong relationship with the Egyptians that no one can deny. It was the reason why ancient Egyptians settled on the sides of the Nile, since that time, a great civilization was done.

The Nile means river in the ancient Egyptian language. Nowadays, we can find proof from the prescriptions and drawings on the pharisaic monuments that they worshipped the Nile god Ha’by. So, the Nile River has great importance in Egypt. We will tell you in this article all you need to know about that great river which is the longest river all over the world.

It flows in northeastern Africa and is the longest river in the world. There are two main tributaries to the Nile:

The Blue Nile River originates from Lake Tana in East Africa on the Ethiopian plateau.

The White Nile meets the Blue Nile at Sudan to form the Nile River, which passes through Sudan and Egypt so that its final destination is the Mediterranean Sea.

In addition, the main source of the White Nile is Lake Victoria

It covers an area of ​​3.4 million square kilometers.

You can check the below map for further details about the Nile.

He also exploited the waters of the Nile River for agriculture, where the main activity was agriculture. The flood of the Nile had a great sanctity as the ancient Egyptians held ceremonies such as the celebration of the fulfillment of the Nile.

Hotels near the Nile River in Egypt

The Nile passes by eleven countries which are called the Nile Basin countries, these countries include Egypt, Kenya, the Republic of Sudan, South Sudan, Eritrea, Uganda, Tanzania, Rwanda, Burundi, the Democratic Republic of the Congo, and also Ethiopia.

The Nile has several names in the countries it passes through, the most famous of which are the Nile, the Albert Nile, the Victoria Nile, the White Nile, the Blue Nile, and also Bahr al-Jabal.

10 facts about the Nile River

The Nile is not just a river in Egypt, but it’s the Lifeline in Egypt and other countries from the basin countries. the most important 10 facts about the Nile River are:

Dam of the Nile River

The Nile River not only supports the civilization of ancient Egypt but also contributes to building modern Egypt by generating electricity. So, the High Dam was built in 1970 in Aswan.

Until today, the Nile River is keeping in playing his rule and fulfilling his promises to the ancient Egyptians. Nowadays it is used for many purposes such as irrigation, Drinking water, and generating electricity as well. Nowadays there are many chips and cruises in the Nile especially between Luxor and Aswan while watching the great temples.

In conclusion, The Nile River has essential importance in Egypt as, without its water, Egypt will be affected a lot. Moreover, many poets were written about the Nile for many years as it is a sacred source of natural water. Therefore, God blessed Egypt with The Nile River the Egyptians must save it from any bad effects and make good use of its plenty of water.