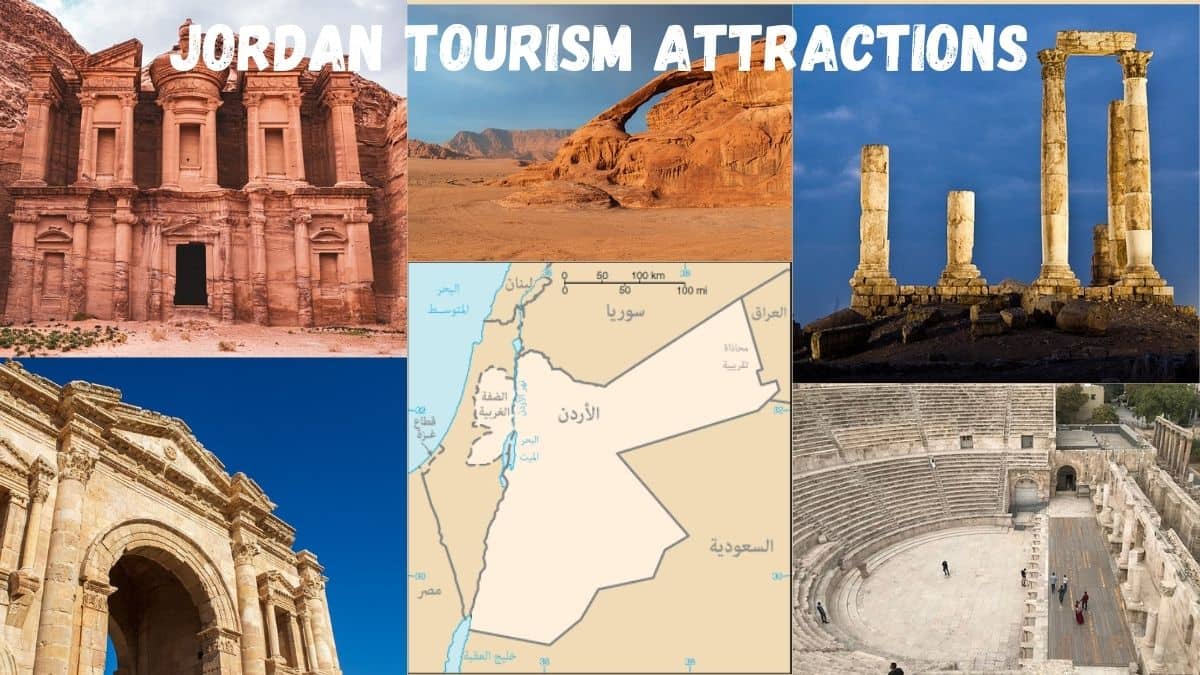 Jordan or the Hashemite Kingdom of Jordan, has gone through many stages since the beginning of ancient times, such as the Stone Age. Therefore, Jordan gained many tourist attractions.

Abdullah II bin Al-Hussein Al-Hashimi is the King of the Hashemite Kingdom of Jordan since 1999 till now.

Amman is the capital of the Kingdom of Jordan, its largest city, and one of the most important tourist destinations, Howerver it is also one of the important artistic and cultural cities in the Middle East.

What is the geographical location of the Emirate of Jordan?

Jordan is located in southwest Asia

First: The borders of Jordan

Southwest: The Gulf of Aqaba, which separates it from Egypt, Saudi Arabia, and Palestine.

The Area of Jordan

Why it was named” Jordan”?

The name Jordan was derived from “the Jordan River”, which runs on its western borders.

How is the weather in Jordan?

The summer: The weather is hot and dry.

The winter: The weather is mild and humid.

There is climatic diversity in Jordan, as a result of the different natural terrain, such as:

Mountainous highlands: A warm temperate climate, as well as a Mediterranean climate.

Jordan has about 57 different nationalities such as:

What is the currency of Jordan?

What is the national language of Jordan?

What is the main traditional food in Jordan?

The most popular traditional foods in Jordan is Mansaf, inverted, Kabsa, Zarb. You must try them, they are delicious.

What are the kinds of transportation available in Jordan?

What are the main airports of Jordan?

There are many airports, such as:

There are many other military airports as well.

What are the best famous malls to visit in Jordan?

There are many Malls in Jordan, but the most interesting 5 are:

Jordan tourism attractions, you must visit

It is an ancient city located about 50 km north of Amman, which is distinguished by its abundance of temples, theaters, and columns. It is considered the second most important tourist area after Petra in Jordan because of its antiquities dating back more than 6500 years. In addition to holding an international festival known as the Jerash Festival.

Nature always plays its role to make places more beautiful so that people can enjoy them, and this is what happens in Wadi Rum, where you can enjoy the picturesque nature and the amazing golden sands, as well as enjoy the tranquility. So If you are looking for rest and relaxation, you should visit Wadi Rum.

It is also considered one of the important areas for medical tourism, as it contains mineral springs. In addition to the wonderful terrain of waterfalls, fiery rocks, and high mountains. So do not miss visiting these areas to enjoy the beautiful nature as there are many Jordan tourist attractions.

In the end, no one can deny the effects that Jordan contains from the manufacture of many civilizations that have passed through time, therefore Jordan became a tourist destination that conveys the history of these eras. to enjoy it. Finally don’t hesitate to visit these Jordan tourism attractions.