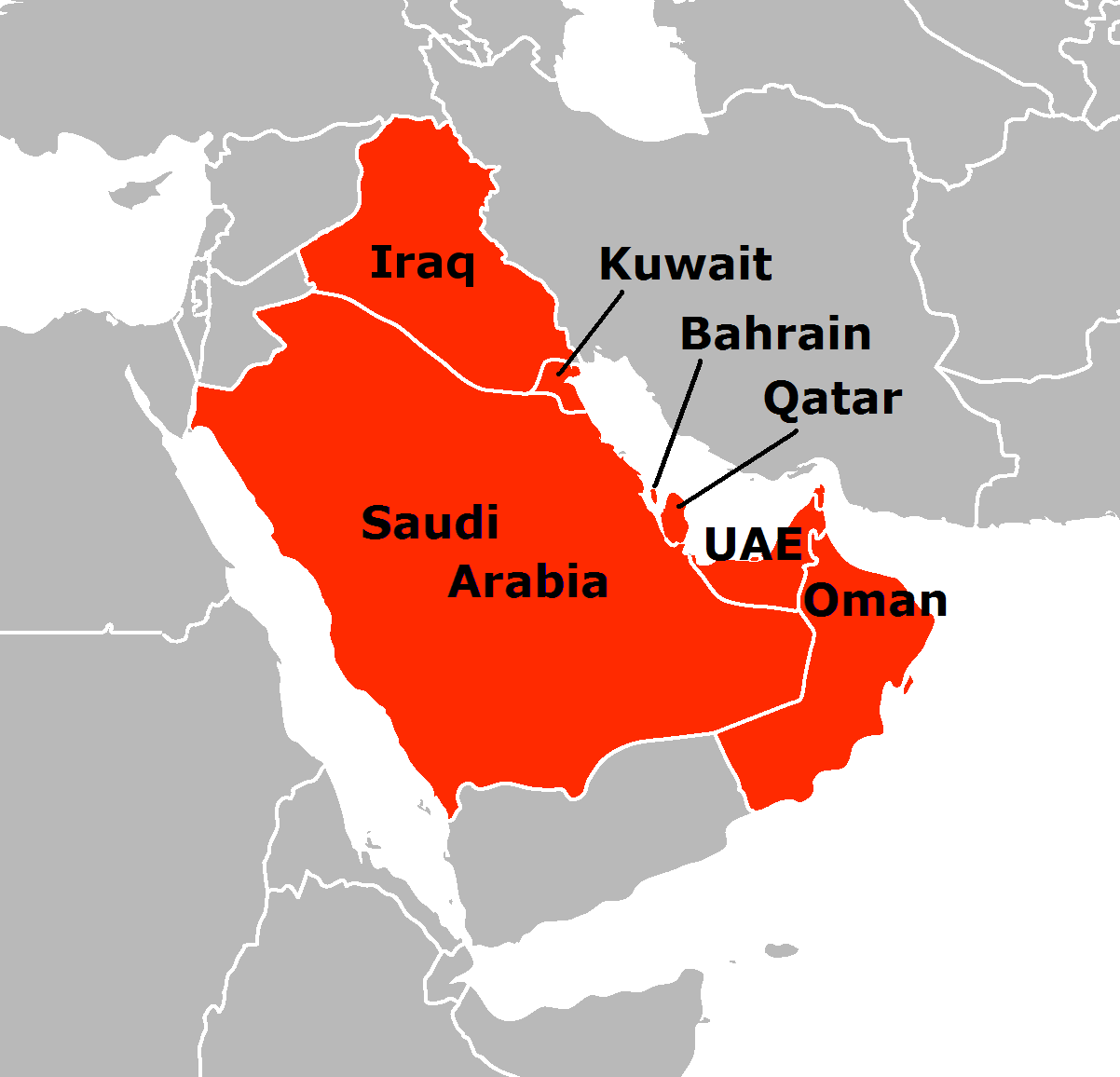 Gulf country are the group of Arab countries that overlook the Arabian Gulf, and it consists of 7 countries: the Kingdom of Saudi Arabia, the United Arab Emirates, the Sultanate of Oman, Kuwait, Bahrain, Qatar, and Iraq. All of these countries, except for Iraq, are members of the Cooperation Council for the Arab States of the Gulf. It is worth noting that Iraq is the most populous Gulf country, while Bahrain is the least populated.

Most of the Gulf countries share many cultures, values ​​and beliefs, whether in the way of living, in the recreational activities provided, or in terms of the economy, as these countries depend on bringing in large revenues from oil derivatives, petroleum,
However, some Gulf countries have become dependent on other sectors, such as: banking and tourism, while differing from each other in many matters, such as: the prevailing system of government; Some are a constitutional monarchy, others are a hereditary monarchy, such as the Kingdom of Saudi Arabia, and some have a consultative council that is elected, such as the Sultanate of Oman .

The Sultanate of Oman is an Arab country, and it is the third largest country in the Arabian Peninsula in terms of area, with an area of ​​309,500 km², and a population of approximately 2.867 million people. The Sultanate of Oman is located in the continent of Asia, specifically in the far east of the Arabian Peninsula. Its distinguished geographical location in opening areas for political, economic, and cultural communication with other countries

Islam is the official religion in Oman, with the presence of some other religions such as Christianity and Buddhism, and the system of government in it is the hereditary royal rule, as Sultan Qaboos bin Said has ruled since 1970 AD, and the city of Muscat is its official capital, and its official language is Arabic, while the riyal is considered Omani is its official currency .

The United Arab Emirates is located on the coast of Oman and the Arabian Gulf. It is an Arab country consisting of 7 emirates, as follows: Umm Al Quwain, Ajman, Dubai, Ras Al Khaimah, Abu Dhabi, Fujairah, and Sharjah. Each emirate is independent from the other. Even in its oil revenues, and it is ruled by an emir, while the king of Abu Dhabi is elected as president, and Dubai takes the position of prime minister, and these jobs are hereditary .

The Kingdom of Bahrain is one of the Gulf countries, and its official capital is Manama. It gained its independence from the United Kingdom on the fifteenth of August in 1971 AD, while it celebrates its national day on the sixteenth of December each year. Bahrain overlooks the Arabian Gulf, with an area of about 779.95 km2, and the system of government in it is a constitutional monarchy .

The State of Kuwait is located in the west of the Asian continent, specifically on the outskirts of the Arabian Gulf, bordered by the Kingdom of Saudi Arabia and the State of Iraq, and ranks sixth among the largest oil reserves in the world. Kuwait is classified as a high-income country, and according to World Bank estimates, Kuwait has the fourth highest per capita income in The world, as it amounts to about 68,940 dollars, and the Kuwaiti dinar is the most valuable currency at the present time.

The State of Qatar is bordered by the Kingdom of Saudi Arabia and the Arabian Gulf, and its system of government is a constitutional monarchy or absolute monarchy, ruled by the Al-Thani family since the establishment of the state in 1825 AD, as the Emir of Qatar at the present time is Tamim bin Hamad Al Thani, and Islamic Sharia is the source The main law in the country.

The Kingdom of Saudi Arabia is the second largest Arab country after Algeria, as it includes most parts of the Arabian Peninsula. The Kingdom is bordered to the north by Jordan and Iraq, to ​​the northeast by the State of Kuwait, and to the southeast by the Sultanate of Oman.
As for the east, it is bordered by the United Arab Emirates, the Kingdom of Bahrain, and the State of Qatar, and it is bordered to the south by the Republic of Yemen, and it is worth noting that most of its terrain consists of deserts and mountains, and it is the only country that has a coast on the Red Sea and the Arabian Gulf, and the Kingdom receives large numbers of Muslims every year, in order to practice the rituals of Hajj and Umrah .

The Republic of Iraq is bordered by Iran to the east, Turkey to the north, Syria and Jordan to the west, Saudi Arabia and Kuwait to the south,
It is noteworthy that Iraq includes mountainous and desert terrain, in addition to a wide central valley between the Tigris and Euphrates rivers, characterized by the fertility of its lands. Many great civilizations and kingdoms have followed Iraq. Since the early ages, it was known as Mesopotamia, and the emergence of advanced civilizations began in it since 4000 BC. Baghdad also became the capital of the ruling caliphate after the Islamic conquest in the period between 637-640 AD, and then the Mongols conquered and looted it in 1258 AD.

The area of the Arabian Gulf is about 250,000 km2, a water arm of the Arabian Sea that separates the mountainous coast of southwestern Iran and the flat coast of the Arabian Peninsula, and its length reaches approximately 1,000 km, while its width ranges between 200-300 km.
The Arabian Gulf overlooks 8 countries: Iraq, Kuwait, Saudi Arabia, Bahrain, Qatar, the United Arab Emirates, the Sultanate of Oman, and Iran. The Strait of Hormuz connects the Arabian Gulf with the Gulf of Oman in the east.

The Cooperation Council for the Arab States of the Gulf is defined as a political and economic alliance consisting of 6 Arab countries, namely: the Kingdom of Saudi Arabia, Kuwait, the United Arab Emirates, Qatar, the Kingdom of Bahrain, and the Sultanate of Oman. The Gulf Cooperation Council was established in May 1981 in Riyadh, Saudi Arabia. Saudi Arabia, with the aim of achieving unity among the member states on the basis of their common goals, and their political and cultural identities, and it is worth noting that the presidency of the Council rotates every year

The Charter of the Cooperation Council for the Arab States of the Gulf states a set of objectives, which are as follows: