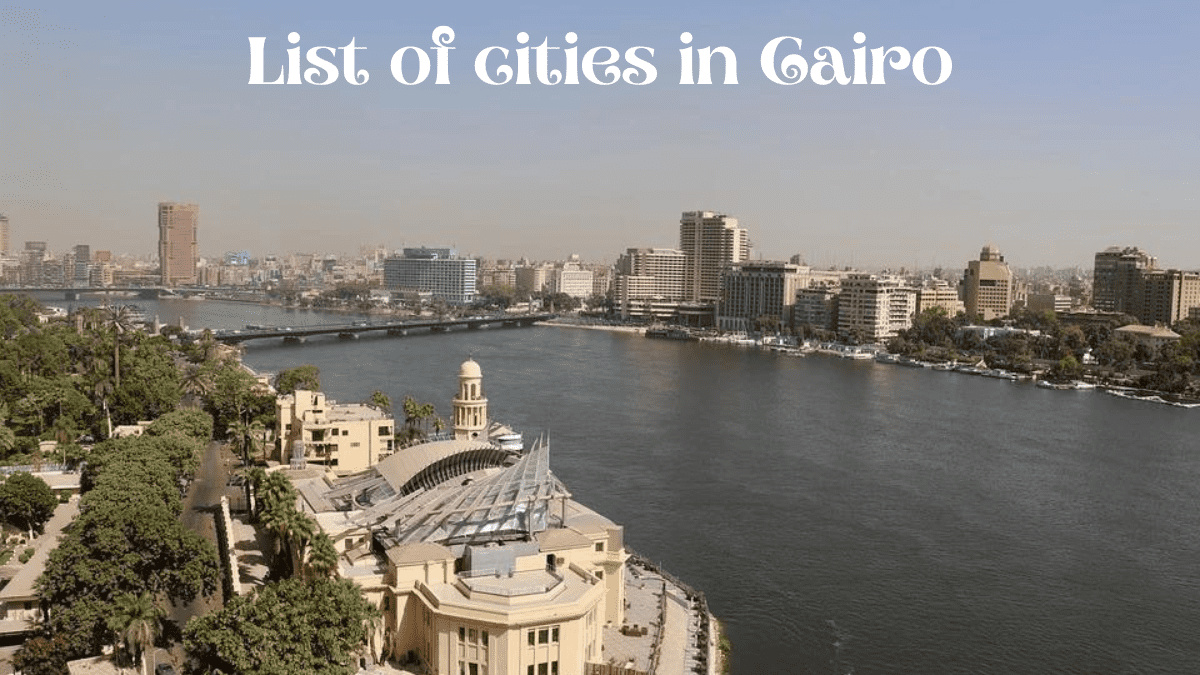 Cairo governorate in Egypt I is the main capital since the old ages It was called “Iuon” in the pre-dynastic ages after king Mina union Upper and lower Egypt, and many tried to conquer it, however Cairo or “Al-Qahera” stayed with strong borders and great history and civilization, we will tell you the list of cities in Cairo.

Egypt is one of the most affected countries in the Arab world because it has proved its role in settling the conflicts in many areas in The Arab countries. So, If you are planning to visit Cairo in Egypt, we will tell you everything you need to know about the list of cities and districts in Cairo.

The foundation of Cairo

The Location of Cairo

Cairo, the capital of Egypt, has been called many names, such as:

Jawhar al-Siqilli called Egypt al-Mansuriya in reference to the city of al-Mansurah because it was named after alMuizz’s father. As almansuriya was established by the father of al-Muizz Li Din Allah.

When Al-Mu’izz Li Din Allah came to Egypt, he called it Al-Qahira, and Cairo’s meaning is that it defeats those who try to invade it. Al-Muizz also meant that it would defeat the enemies of the Fatimid state, especially the Abbasids.

Other names for Cairo:

There were many names for Egypt such as:

The main language of Cairo is the same as all of Egypt and also the Arab world which is the Arabic language.

As we mentioned, Cairo has gone through many eras that contributed to the establishment of Cairo, establishing its landmarks and also developing it through the ages and civilizations. In addition, in the times of ancient Egypt, the first beginning of recent Cairo on the western bank of the Nile was in the year 4225 BC. When Mina united the two countries (Delta and Upper Egypt).

Cairo was called “Awon”, as it was the capital of Egypt in the pre-dynastic era and when Mina united the two countries. Besides, the location of city of “Awon currently” is located in the district of El Matareya and Ain Shams currently. Then in the Coptic era, it was called “Ono”, which means the horizon of the sun. Then the Greeks named it “Heliopolis”, which means the city of the sun.

Cairo Governorate is divided into four main regions and the main list of cities in Cairo:

It includes 9 neighborhoods; these are the Names of cities in Cairo such as:

It includes 9 neighborhoods such as:

It includes 8 neighborhoods such as:

It includes 11 neighborhoods such as:

New Cairo is the Biggest city in Cairo Governorate and also it consists of high-end residential compounds. And also, includes The first assembly, the third assembly, and the fifth assembly. It is also located in the east of Cairo.

There are many famous cities in Egypt. This is a List of cities in Cairo such as:

It is the main capital of Egypt. Besides, being the biggest population of all Egypt countries.

It is one of the Best cities to see in Cairo because it has the Great Pyramids which are 4500 years old. Besides, other famous Museums include a lot of treatures on the Egyptian pharaonic civilization.

Hurghada is a coastal city with beautiful landscapes and also clear waters. It also has a lot of resorts. One of its most important features is the wonderful weather, so many tourists from Europe come to it, especially in winter.

Sharm Al-Sheikh has a lot of similarities with Hurghada as it has great nature, weather, and also the finest hotels. Besides, the natural Reserves. And also their many activities to do such as swimming or diving or other sports.

It has a third of the world’s monuments that you should visit and enjoy the temples while taking a cruise in the Nile River. Besides, the amazing mix between nature and history in Luxor.

It’s near Luxor and you can enjoy the temples there as well as the fascinating nature of Aswan.

In conclusion, Cairo is one of the most famous cities in the Arab world, it has many important Arab organizations. It is one of the most important capitals that have witnessed great historical events. In addition, Cairo has a lot of the ancient Egyptian civilization that many tourists come to visit from each place in the world. So, don’t hesitate to visit Cairo.