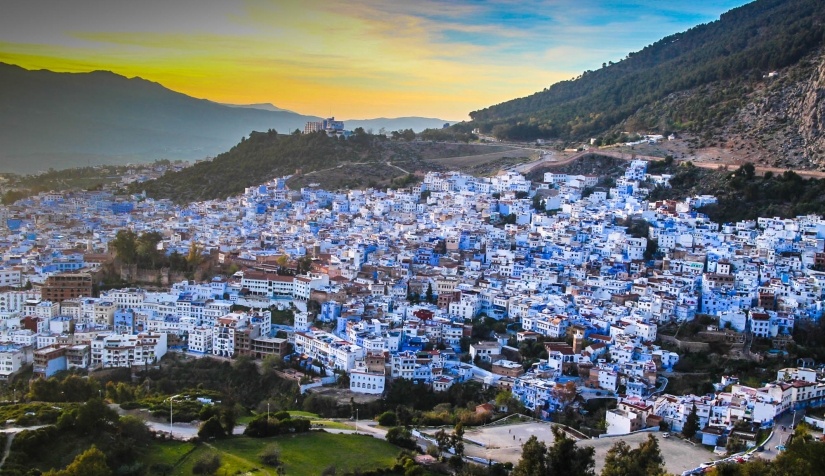 The popular tourist site Trip Advisor has released its annual list of the best tourist
destinations in the world for 2015, and the Maghreb was the only Arab country on this list.
Morocco is considered one of the most beautiful Arab countries, because it contains many cultures that merge with each other. In Morocco, there are Arab culture, French culture, and African culture. In Morocco, there are many mosques designed in the ancient Islamic style.

The Kingdom of Morocco is located in the far northwest of Africa, bordered to the north by
the Mediterranean Sea, to the south by Mauritania, to the east by Algeria, and to the west
by the Atlantic Ocean.
It has an area of about 446,550 square kilometers, and a population of 32,987,206 people,
most of whom are Arabs and Berbers. Morocco contains many natural resources, the most
important of which are phosphates, in addition to fish and agricultural lands, and its most
important products are vegetables, fruits, olives, and grains.

Morocco contains many old neighborhoods located in large cities, which are characterized by their markets, restaurants, and cafes.
Morocco is also characterized as the gateway to Africa and the East towards Europe, North and South America, as Morocco extends on the Atlantic coast and the Mediterranean Sea to have a geography that distinguishes it from other countries, and makes it one of the most beautiful tourist areas in the world .

The most important tourist destinations in Morocco Rabat

Rabat is the capital of Morocco and the second largest city in it. Rabat was founded in the
middle of the twelfth century AD by the Almohads, who transformed it into a cultural and civilized center. This city is located on a large plain on the shore of the Atlantic Ocean, with
a population of one and a half million people, and contains many tourist places, including the following:

Bou Regreg River: It is a river that passes in the middle of the city.

Bab al-Rawah and Bab al-Udaya: They are the two gates that are located in the western
region of the wall, where they are distinguished in architecture, decorations, and inscriptions written in Kufic script.

Folklore Museum: where you can go there and watch the craftsmen at work.

Museum of Antiquities: This museum is located in the modern city, and contains many
pieces that have been found since the Islamic era, as well as since the prehistoric era.

Mohammed V Theater: It is the largest theater in Morocco.

Casablanca is the largest city in Morocco, with a population of eight million. This city is
characterized by its moderate climate, and it is one of the most beautiful cities overlooking
the Moroccan coast, and the economic capital of Morocco, as it contains the most
important port in the continent of Africa, and its airport is the largest in the country, and
there are many beautiful tourist places in Casablanca, including the following:

Mohammed V Square: This square is characterized by its Andalusian character, and there is
a large fountain around which many people gather at nightfall.

Hassan II Mosque: This mosque is located in the third place among the largest mosques in the world.

Art Deco neighborhood: This neighborhood is located in the eastern region of the old city,
and includes both the Arab League Park and the administrative area.

The New Marina Port: It is a port with elegance and a modern touch, unlike the old port.

Corniche Street: It is a street with a quadrilateral shape, which gives visitors a unique
experience in roaming, as it is frequented by many people, especially in the early morning period.

Marrakech, the third largest city in Morocco, is a haven for tourists in the summer, as it opens its doors and colorful markets to tourists. It is also a cultural center in Morocco, due
to the presence of many centers of movement in it, and there are a number of tourist places
in Marrakech, including the following:

Museum of Islamic Art: Visitors come to visit this museum in order to see the landmarks of Moroccan civilization.