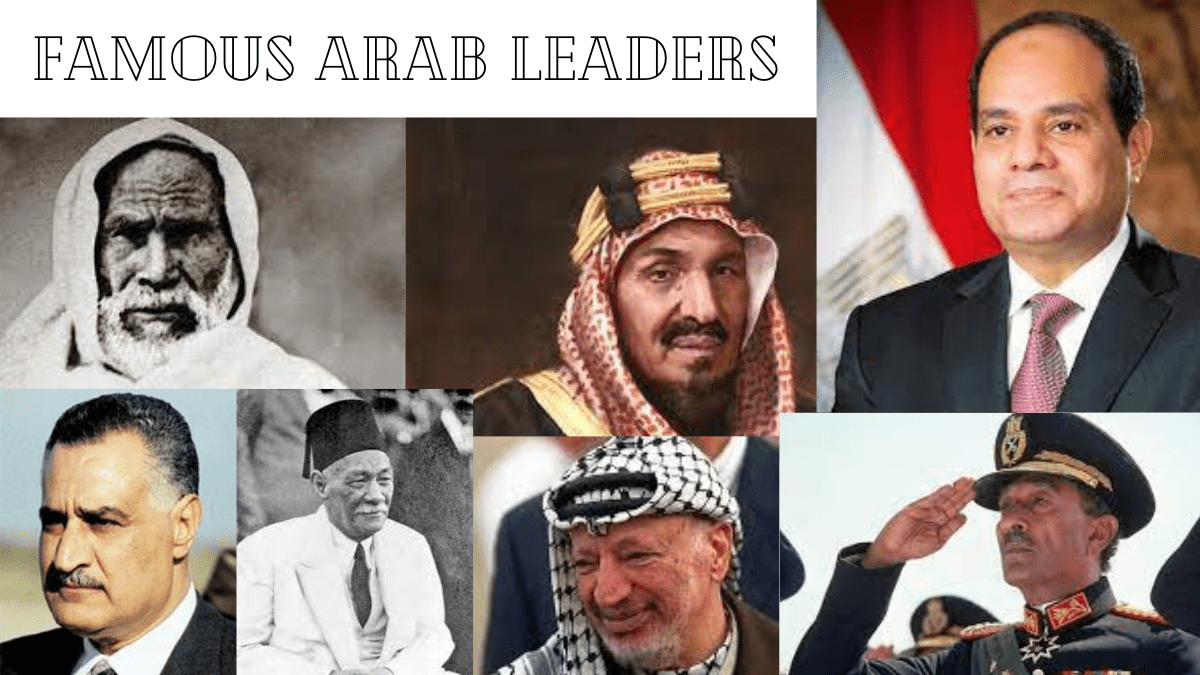 Many famous Arab leaders have appeared in the Arab world throughout the ages, whether modern or ancient. In addition, these leaders of Arab countries have contributed to many outstanding political achievements in Arab science and the world at large. Therefore, in this article, we will tell you about the most important and famous Arab leaders.

The word leaders include many names, and one of the most important Arab leaders is the Arab president. There is also another pronunciation of the word chief in Arabic, which is “raees,” so you will hear it often in Arabic before the names of all Arab presidents.

There are many famous Arab leaders that have proved their wisdom and intelligence as well. In addition, they played an important role in the Middle East and in front of the west policies. These famous Arab presidents and Past Arab leaders such as:

He is King Abdul Aziz bin Abdul Rahman bin Faisal Al Saud one of the Past Arab leaders, born in Riyadh in 1876 AD. In addition, at the time, the Ottomans controlled most of the Arab countries.But he was able to unify the modern Kingdom of Saudi Arabia and its first king. In addition, he was the fourteenth ruler of the Al Saud family. Moreover, he continued the wars to unify Saudi Arabia for more than twenty years. King Abdul Aziz had a famous stance against the British and American governments. And also he supported the Palestinian people and sent the army and weapons to help them. He was one of the most important Middle East presidents.

He is one of the most important Middle East presidents and the Past Arab leaders. His name is Gamal Abdel Nasser Hussein Khalil Sultan, born in 1918 in Alexandria, Upper Egypt. He is the second president of Egypt after Mohamed Naguib. Besides, he is considered the most important leader of the July 23, 1952 revolution that ended the rule of the Ottomans in Egypt and led to the departure of King Farouk from Egypt. In addition, he resigned from the army and took over as prime minister and then the presidency of Egypt in 1965 AD. And also the people chose him after the referendum.

In addition to the most important thing he did, when America and Britain stopped financing the High Dam. Then, he dealt a strong blow, which is the nationalization of the Suez Canal Company to become completely Egyptian. It happened in the custody of the union with Syria under the name of the United Arab Republic for a period of time only. Then, he died in 1970.

His name is Omar bin Mukhtar bin Omar Al Manfi Al Hilali, born in 1858 AD. He is one of the most famous Arab Muslim resistances to the Italian occupation of Libya. Besides, he fought the Italians from he was 53 years old until he reached 72 years old. In addition, he died in 1931 AD after the Italians issued a death sentence against him. In addition to the fact that he was executed when he was old, this sparked the revolution again, and Libya gained independence from the Italian occupation. He was called many titles by Arabs, the West, and Muslims, such as the Sheikh of the Martyrs, the Sheikh of the Mujahideen, and the Lion of the Desert.

He is Muhammad Anwar al-Sadat, born in 1918, he joined the Military College and then joined the Free Officers Organization, and this is what helped them contribute to Egypt’s independence from Ottoman rule. In addition, he is the third ruler of Egypt after Mohamed Naguib and Gamal Abdel Nasser. President Gamal Abdel Nasser was one of the Past Arab leaders chosen as his deputy during his rule. He assumed the presidency in 1970.

He had many political positions that demonstrated his intelligence and political sophistication. In addition, he was credited with restoring the Sinai Peninsula after the tripartite aggression against Egypt and the setback, but he succeeded in the glorious October 6 war in 1973 to recover the occupied lands and drew the world’s attention to the strength of the Egyptian army. He was the first to sign a peace treaty with Israel, which was supported by some and also opposed by many, but he had a political view of this. He was assassinated during the October celebrations in 1981.

He is one of the most important Arab leaders who spent his whole life fighting against the Israeli occupation of Palestine. He was born in 1929. His name is Muhammad Abd al-Raouf Arafat al-Kidwa al-Husayni. In addition, he was nicknamed Abu Ammar al-Bakhtiar. He made many agreements and treaties and did everything in his power to end the Palestinian-Israeli conflict.

The Arab world witnessed many struggles, as the Europeans and the West were coveted by the difference between the Arab countries, as well as their weakness at that time, while the Ottoman Empire, Britain, and America were in control of world politics and many Arab countries were occupied. But the Arabs did not despair, and many revolutions took place from time to time in an attempt to get rid of the colonizer. Therefore, many former leaders appeared, whose courage and valor still stand against the occupiers. Among the most famous of these leaders are:

There are many important middle east presidents nowadays that are playing an important role in the policy and the economy as well such as:

The presidents of the Emirates have proven that Arab countries can progress and develop technologically, as the United Arab Emirates has become like a piece of Europe in order, technology, and development in all areas of life. In addition, it is the most important tourist attraction in the world due to its beautiful nature and distinctive architecture, in addition to high-quality services.

In a short period of time, the President of Egypt was able to complete many important projects in Egypt, improve the economy and develop the country in various medical, economic, industrial, and agricultural fields. Not only that, Egypt’s role was evident in global political conflicts, as Egypt helped establish the armistice in the Palestinian territories and build the reconstruction phase in Egypt.

In addition, He stopped the threat to occupy Libya. Egypt has restored its strong relationship with many Western and European countries, as well as its sovereignty over the Middle East.

Saudi Arabia has witnessed a great development since the discovery of oil, and a tremendous development has taken place, as well as in the last ten years, many social changes have occurred, which called for the support of women and the lifting of restrictions imposed on them in Saudi society while preserving Islamic principles and Sharia.

Not only this, the role of the Kingdom of Saudi Arabia in world politics has emerged, as it is considered one of the Arab powers that the West and Europeans are anticipating its reaction to global political situations of wars and threats. Therefore, it still plays a major political role in supporting Arab countries and Arab unity.

In the end, the Arab world has gained political intelligence and economic powers represented in the many Gulf States and the Middle East. All Arab countries are still striving for progress, economic growth, and political independence, increasing per capita income and providing all means of comfortable living for the Arabian people.