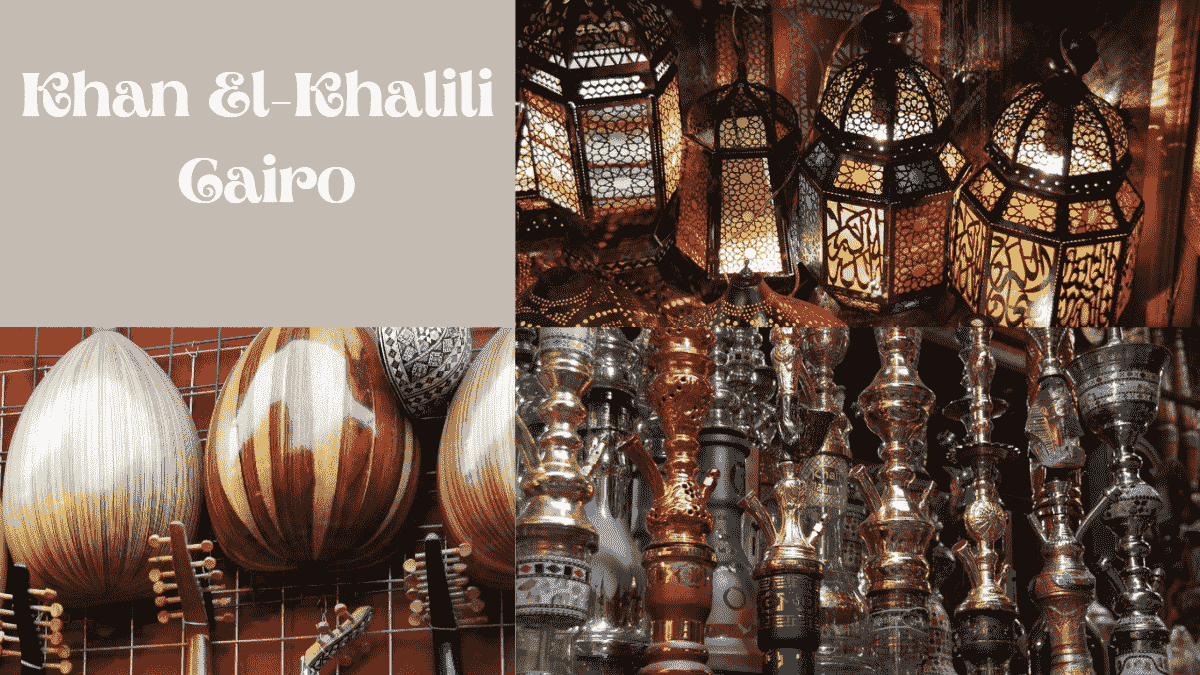 Egypt is full of amazing historical sites, Khan El-Khalili Cairo is one of the main old destinations that many tourists visit from all over the world. In addition, it is the old market and bazaar in the middle east as it dates back 600 years ago.

You will enjoy other near sites such as Al-Hussein Mosque and Azhar Mosque as well.

We will tell you everything you need to know about Khan El-Khalili Cairo and its history.

The general atmosphere in Khan al-Khalili has characteristics of the distinctive Mamluk architecture. Where you can notice the mashrabiyas decorated with copper. In addition to the avenues available to passers-by, which were widespread at the time.

The location of Khan El-Khalili

Khan Al-Khalili Market is located in Al-Hussein neighborhood; besides it is parallel to Al-Muizz Li Din Allah Al-Fatimi Street. In addition, it is located next to the Imam Al-Hussein Mosque. Its address is El-Gamaleya, Cairo Governorate 4331302.

If you are planning to visit khan al Khalili Egypt, it is open all weekdays from Saturday to Friday from 9:30 to 11 pm.

You can visit Khan El-Khalili any time as we have mentioned it is open all the time. However, the best time is after 10 pm as you can enjoy the breeze and the charming atmosphere. Moreover, you can set at any historical restaurant or Café as it is one of the best places to visit in the middle east.

There are many things and souvenirs with ancient pharaonic or Mamluk characteristics that attract tourists such as:

There are many famous restaurants to enjoy once you visit Khan El-Khalili Cairo such as:

There are many historical Islamic sites near Cairo Khan el-Khalili bazaar. To get the maximum benefit of your journey to Khan El-Khalili, you must include the following site as it is an important tourism attraction in Egypt such as:

Its construction dates back to the Fatimid era, with the first Fatimid caliphs, al-Kaz li Din Allah, the Fatimid. It is considered the largest open museum in the world and includes the largest number of Islamic antiquities, numbering 29. It is one of the most important streets in Cairo, as it contains the features of Islamic architecture and the extent of its superiority in this era of time.

Muhammad Ali Citadel is located on top of the Mokattam Mountain in 1183 AD. It is also considered one of the most luxurious military castles that were built and passed through many important historical events, which the castle withstood. In addition to containing a large number of observation towers. In addition to the presence of the Police Museum, as well as the Military Museum. Many tourists come to it, especially since it is close to Khan Al-Khalili, so you can include it in your tourism program in Cairo. In addition, it is one of the castles that were of great importance to Egypt, as it is located on the plateau to refute the enemies.

If you are interested in Islamic architecture, you will be impressed by the greatness of Al-Hussein Mosque, which millions of Muslims and others come to, whether to seek blessings from it or to enjoy its appearance that calls for pride in Islamic civilization. It was built in the Fatimid era in 1154 AD. It is also considered to be a great sanctity for Muslims due to the presence of the shrine of our master Al-Hussein, where it is believed that Mrs. Zeinab brought her to Egypt.

It is one of the greatest and most famous mosques in Egypt, as it is characterized by Islamic architecture with a high level of workmanship. It is also one of the best archaeological sites in the world and was built in 970 AD. In addition, it was named after the daughter of the Prophet, Fatima al-Zahra. In addition, it is a huge Fatimid monument, which includes 20,000 worshipers.

Khan al-Khalili was an inspiration for many artists, writers, and writers, such as the great writer Naguib Mahfouz, who used a café in Khan al-Khalili as a permanent place to frequent. In 1946, he wrote Khan El-Khalili’s book and novel which got with great success.

In conclusion, Khan El-Khalili Cairo is one of the most amazing sites you will never forget that atmosphere. Besides, it is full of amazing markets, restaurants, and historical sites that you will enjoy taking photos as a memory. And also, you can buy valuable souvenirs from Khan El-Khalili Bazaar. You can also enjoy the Giza Pyramids complex and the great Egyptian Museum.

What to buy in Cairo?

You can buy many souvenirs with the perfect imitation of the pharaonic designs from Khan el-Khalili.

How old is Khan el-Khalili?

Khan el-Khalili is the oldest market in the Arab world, it is about 600 years old.

What is special about Khan El Khalili?

The most amazing thing about Khan el-Khalili is that it is the oldest market in the middle east, besides having cheap local souvenirs and gifts.