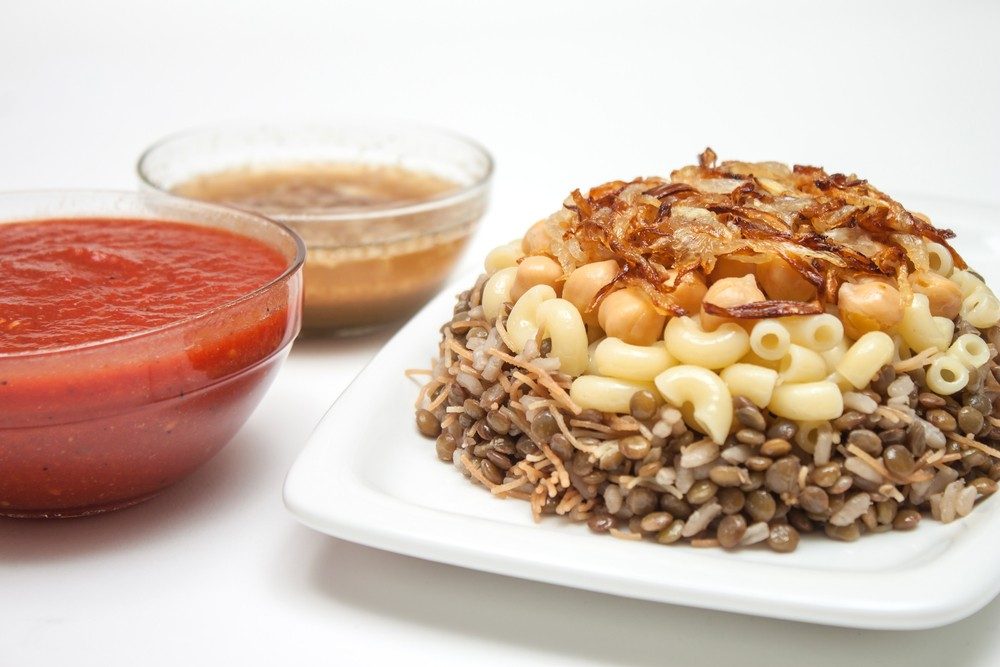 All countries of the world differ in the types of food and drinks they offer, as a result of the difference in civilizations, cultures, customs, and traditions Egyptian cuisine is distinguished by its simple, traditional, and far-fetched food.

It is also characterized by a creamy taste and is highly dependent on starches, in addition to proteins such as fish, meat and poultry.

In this article, we will present to you the most famous foods in it.

One of the most famous traditional food in Egypt, made of lentils, pasta, rice, and fried onions.

The frying, delicate and hot, contains a distinct set of ingredients.
There are many shops in all regions of Egypt to serve the Egyptian Koshari dish .

Taameya or falafel, which is also one of the Egyptian popular dishes that there are shops specializing in making in Egypt
Where fried taameya is sold with delicious bean sandwiches, crunchy potatoes, baba ghanouj salad, and fried eggplant. (This food is also famous in Gaza Strip which is on the eastern side of Egypt)

It is considered one of the main dishes on the Egyptian table, and it is prepared with sauce, onions, and special spices to give the distinctive taste of the stuffing,
In addition to a mixture of rice, dill, coriander and parsley and then put this mixture in different types of vegetables such as; Cabbage, eggplant, zucchini, bell peppers, and grape leaves, served with chicken, duck or meat.

It is one of the One of the most famous traditional food in Egypt, and it was grown on the banks of the Nile since the era of the Pharaohs.
There are many recipes for serving the mallow dish, as we find molokhia with rabbits, molokhia with meat or chicken, and molokhia with shrimp.
Molokhia is distinguished by the smart taste and attractive aroma resulting from frying garlic

This dish is considered one of the distinctive and famous dishes of the Egyptian taste, and mombar is prepared.
Stuff it with a mixture of rice, onion, parsley, dill, coriander, and tomato sauce, then place it on the fire. Then it is fried in oil to get a delicious crunchy taste.
As for the knuckle dish, it is prepared in many ways, including the knuckles casserole with onions in the oven or served in the form of a fatteh dish with trotters.

Mombar and trotters are served alongside other varieties of meat desserts such as fasha, tripe, spleen and liver.

It is considered one of the distinctive and related Egyptian food
With the Spring Festival celebration ceremonies, this variety is prepared by salting and drying mullet fish, then storing it in a controlled manner for a period of time,
Then it is served with lemon, tahini, and onions, and it can be eaten with some other types of salted fish such as sardines,
The origins of the dish, fesikh, go back to the Pharaonic era, when the pharaohs used to preserve fish in this way.