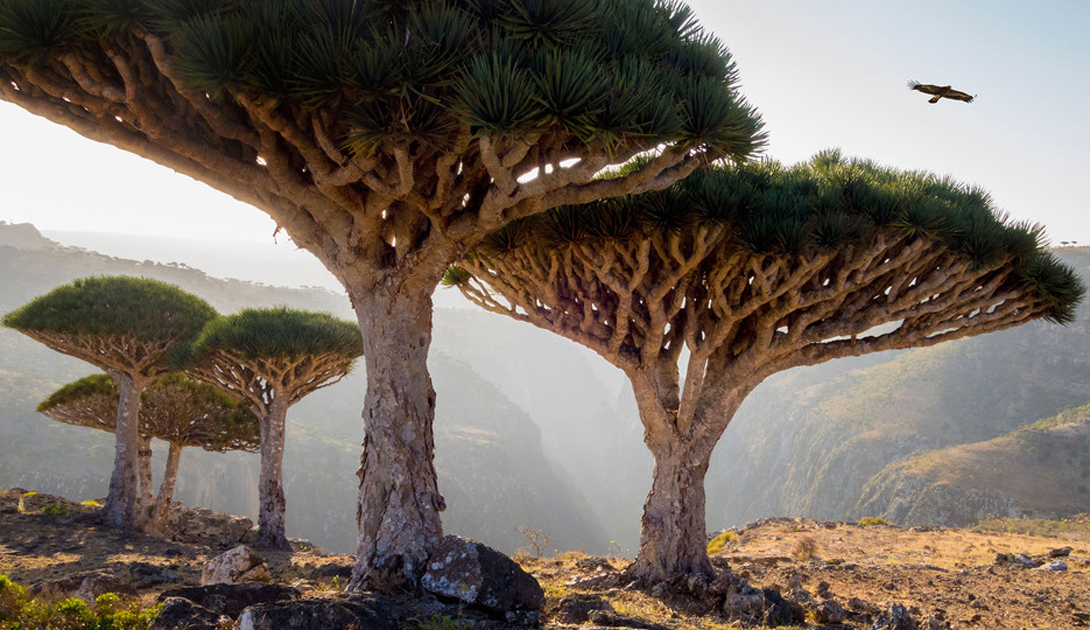 Socotra Island is considered a continental island. It separated from the Arabian Peninsula and the African continent in prehistoric periods, and developed in the form of a small continent. Socotra Island is located in the Arabian Sea, and its southern coast faces the strong waves coming from the Indian Ocean constantly. It is noteworthy that the city of Hadibo, which is located On the northern coast of the island, it is considered its capital and largest city.
The name “Socotra” comes from Sanskrit and means the island of bliss.

Socotra Island is located in the northwest of the Indian Ocean, 340 km southeast of Yemen, 700 km southeast of Aden, and 225 km from the Horn of Africa.
It has an area of approximately 3,600 km2, and is thus the largest island among the group of islands that extend east of the Horn of Africa and together form what is known as the Socotra Archipelago, which is located near the Gulf of Aden, and consists of four main islands: Socotra, Abd al-Kuri, and Samha. Darsa, and a number of other small islands.

The Socotra Archipelago is of global importance because of its biological diversity, represented by rare plants and animals; About 37% of its plant species are not found anywhere else in the world.
The same applies to 90% of reptiles and 95% of land snails. The archipelago is characterized by many endangered land and sea birds, in addition to various marine animals.
The island also includes about 900 species of endemic plants; Such as the Dracaena cinnabar, patience trees, and others, and the total of these species reaches about 307 species, which led to the classification of the archipelago as a UNESCO World Heritage site in 2008.

The island consists of ancient igneous rocks in addition to metamorphic rocks, as there are many granite rocks, as its geological composition is not different from that of the Arabian Peninsula, and
The topography of the island includes mountains, plateaus, plains, valleys, and bays, and in the middle of it is a group of mountains called Hajhar Mountains, with the highest altitude of about 1500 meters on the eastern side of it, and the height of the central region of which is about 500 meters, and it is noteworthy that the island enjoys a desert climate Tropical, and the level of seasonal rains rises in the winter, especially in the high interior regions, while it decreases along the low coastal region, and strong monsoons blow and the sea level rises in a specific season.

Tourism on the island of Socotra

Socotra Island is an important international tourist destination, especially for eco-tourism, so the island is proposed as a reserve and an important place for studies and research due to its rich biological diversity.
Given the development of ecotourism and its association with the guidelines of the Convention on Biological Diversity, it is imperative to establish vital places in addition to anthropological reserves,
Which leads to improving the standard of living of the population on the island as well as preserving their traditions, which positively affects the future of the archipelago as a whole.

The north-east of Socotra is characterized by white sandy beaches, other rocky beaches, a number of valleys and plateaus, in addition to coral reefs. On the island, the center of the island includes deep valleys, rocky peaks, and multiple plateaus, along with a large group of rare plants and wildlife. It is also home to the Hajhar Mountains. It is worth noting that the southern part of Socotra Island is characterized by a low population and many sand dunes.