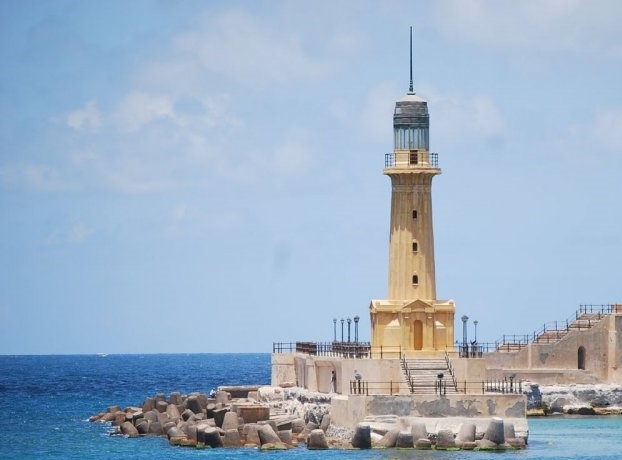 Description of Lighthouse of Alexandria

It is historically established that the Lighthouse of Alexandria, which was one of the Seven Wonders of the World , was established in 280 BC. , In the era of ” Ptolemy II “, was built by the architect of Greek ” Sostratus of Cnidus ,” The length of one hundred and twenty meters, making it the highest building in its time, and some believe that the stones used in the construction of Bey Citadel are stones lighthouse destroyed, and the castle site is The same is the site of the collapsed lighthouse. Al- Masudi , in the year 944 AD , described the lighthouse in an honest way, estimating its height at about 230 cubits. An earthquake occurred in 1303 AD during the reign of Sultan ” Al-Nasir Muhammad bin Qalawun “, hitting the eastern Mediterranean and destroying the forts, walls and minaret of Alexandria.

Al-Maqrizi described , in his plans, the destruction that afflicted the city, and mentioned that Prince Rukn al-Din Biber al-Jashnkir had the minaret, i.e., restored it, in the year 703 AH . Half a century after that devastating earthquake, Ibn Battuta visited Alexandria on his second trip, in the year 1350 AD , and wrote: “I went to the lighthouse, upon my return to the Maghreb, and found it destroyed by ruin, so that it is not possible to enter it or ascend to it; the ” King Nasser “, began to build the lighthouse Bazaiha, Fagah death for its completion. “

The Egyptian historian “ Ibn Iyas ” relates that when Sultan “ Al-Ashraf Qaitbay ” visited Alexandria in 1477 AD , he ordered that a new tower be built in the place of the lighthouse, which is later known as the Qaitbay Tower, and then the Qaitbay Tower, which is still standing today.

The lighthouse consisted of four sections, the first being a square base, in which many windows were opened, and it contained about 300 rooms, equipped for housing the technicians operating the lighthouse and their families. The second floor, was octagonal, and the third round, and finally come Fanar summit, where he settles the lantern, lighting source in the lighthouse, surmounted by a statue of Isis Lord Fanar Isis Faria .

Interestingly, the name of the island of Pharos “Pharos” became a beacon note convention, or a lighthouse, in European languages, the word derived from it Farologi “Pharology” to denote the science Beacons.

How the lighthouse works

No one knew, with certainty, how the lighthouse, or the lighthouse, was working, and some jurisprudence appeared, experts and historians did not settle on any of them. There is a description of a huge mirror, refracting the rays, at the top of the lighthouse, which made it possible to see the incoming ships, before the naked eye could detect them.

The ancient Arab traveler Ibn Jubayr wrote that the light of the lighthouse was visible from a distance of 70 miles, in the sea. There is a narration according to which the lighthouse mirror, one of the high technical achievements of its time, fell and crashed in the year 700 AD , and was not replaced by others, and the lighthouse lost its functional character since that time, and before the earthquake completely destroyed it.

It is said that going up to the lighthouse, and going down from it, was by a spiral ramp, while the fuel was lifted to the place of the lantern, on the last floor, by a hydraulic system. Forster described another method for raising the fuel (wood) to the site of the lantern. He mentioned that a long line of donkeys was in constant motion, day or night, up and down the spiral ramp, carrying wood fuel on their backs!

At the beginning of the twentieth century, German archaeologist and architect Hermann Thiersch presented a model of the lighthouse , in the form of a monument, rising as a luxurious tower consisting of thirty floors, and containing 300 rooms.

Research about Lighthouse of Alexandria

The team of archaeological researchers working at the Qaitbay site is seeking to obtain stone blocks belonging to the ruins of the ancient lighthouse, knowing that its facade bore a memorial plaque, carved in huge Greek letters. , are the ruins of the Phanar.

Some historians doubt that the ancient lighthouse is the source of these blocks, and believe that they are just rocks that were thrown into the water, in the Middle Ages, as a defensive measure to close the port to the ships of the invading Crusaders. Nevertheless, ” Jean-Yves Emperor ” still clings to his belief that among these sunken ruins pieces of the Phanar’s body, fell into the water when that huge tower was destroyed, by the earthquake. In order to confirm these possibilities, trying to Jean – Yves that keeps track of all the historical evidence and references about the size and body so mysterious building, which was mentioned and described in the writings of dozens of writers Greeks and ancient Romans and Arabs, who have registered descriptions strange to him, but their writings to Achwi Galil Emperor , for generality and lack of accuracy and sometimes contradict each other.