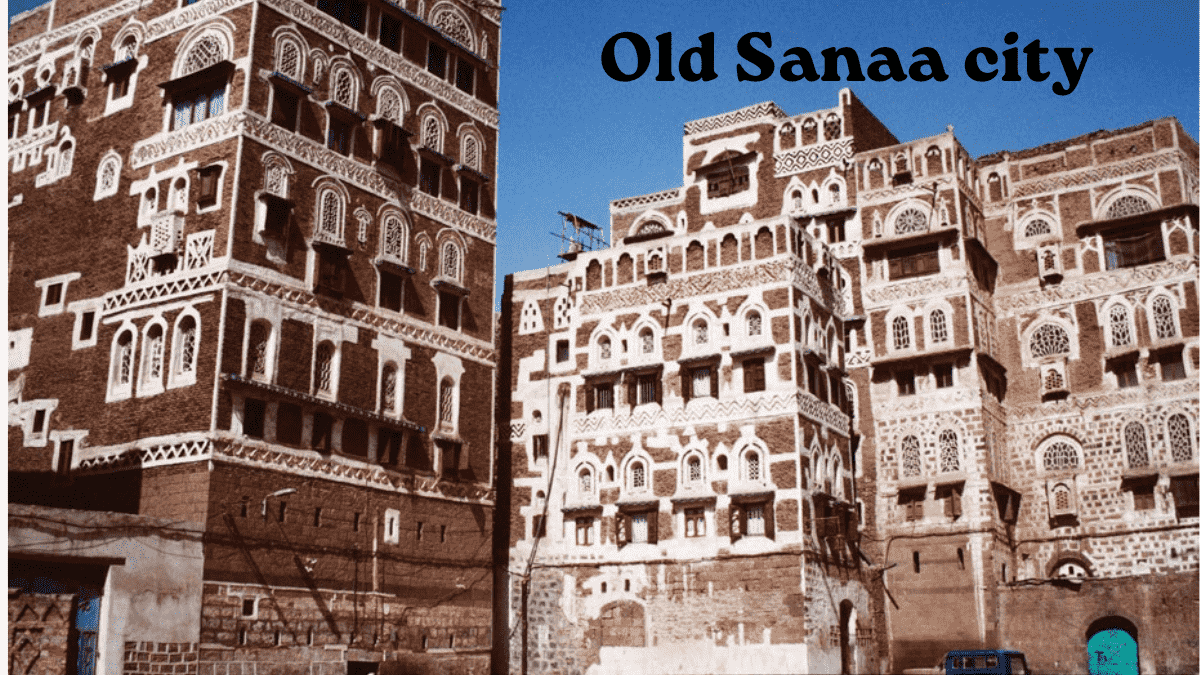 Old Sanaa city is one the oldest Arab cities, it dates back more than 2000 years. Besides, it has a vast area full of buildings and mosques which is characterized by its great architecture. In addition, UNESCO has added the old city of Sana’a to its list of World Heritage Sites in Danger. So, we will tell you everything you need to know about Old Sanaa city.

The site of the ancient city of Sana’a is the highest peak of Jabal Nuqum in the mountainous heights in the west. It also gradually rises towards the east. The closest door to it is the Rosary Gate.

It was the temporary capital of Sabaa in the first century.

The ancients called it Musanna, which means fortress in the ancient South Arabian language. As was mentioned in the old prescription. The name evolved over the years to become Sanaa. Actually, its name in the past was Sam in relation to Sam bin Noah. And also removed the proportion of Azal bin Yaqout, the grandson of Sam bin Noah.

Also, the people of Saba inhabited the city of Sana’a for a long time, and there were wars and conflicts, and they were among the longest people who settled in the ancient city of Sana’a.

The city of Sana’a began in a very small area, and the first building in it was the historic fort at the foot of the mountain, they called it the Ghamdan Palace.

Then they built the surrounding areas, such as Aiban, Nuqum, Haddah, and Asr, as the inscriptions on them date back to the first century. After the expansion of the city, they built a circular wall around the city.

With the entry of the Islamic call to the old city of Sana’a, the ruler responded to it, so the Prophet appointed him as governor of the old Sana’a. And the governor settled in the old city of Sana’a, so he built the Great Mosque in it, and the companions of the Messenger entered it, which made it a great edifice of knowledge and a center of enlightenment, so its breadth increased more than before.

Finally, it extended from Mount Nuqum in the east to Mount Aiban in the west.

The old city of Sana’a witnessed many wars, earthquakes, and disasters, yet it withstood. And you still enjoy the unique and ancient architecture, even in modern Sana’a, it still mixes the unique architecture with modern architecture. The State of Yemen also sought to organize a committee to preserve the city and its architecture and the lanes, mosques, walls, and doors it contained.

Similar to the ancient cities, they built many gates for protection as well as to support the construction of the circular wall. Therefore, there are main and secondary gates. The main doors are like this:

Al-Yaman Gate: It overlooks the southern side.

Shuoub Gate: It overlooks the Shuoub neighborhood on the northern side.

Stran Gate: It overlooks the eastern side towards the castle.

Al-Subha Gate: It overlooks the western side towards the field and the neighborhood of Bir al-Azab

While the other non-main doors are:

Khuzaymah Gate: It overlooks the south direction and leads to the Khuzaymah cemetery.

Al-Shaqadif Gate: It overlooks the north direction and they call it Bab Al-Hadid.

Al-Qaa Gate: It is the door to the Qaa Al-Yahud area.

It has many lanes such as:

The old city of Sana’a has many mosques as a result of the Islamic conquest. Therefore, the number of mosques reached 46 mosques, and they are located in all lanes and inside the old market. There are many mosques such as:

In conclusion, old Sanaa city is one of the oldest cities that still have valuable constructions and architecture. Besides, it dates back more than 2000 years since UNESCO added the old city of Sana’a to its list of World Heritage Sites. So, it has many mosques, doors, and lanes which are still in good condition due to the government’s efforts to save them.

How old is the old city of Sanaa?

Is Sanaa the oldest city in the world?

Sanaa city is one of the oldest cities still inhabited in the world. Besides, it is believed that it was built by the son of Noah. Moreover, the city of Sana’a was inhabited by the people of Saba for a long time, and there were wars and conflicts, and they were among the longest people who settled in the ancient city of Sana’a.

What language does Sanaa Yemen speak?

Sanaa city is an Arabic country so; Sanaa Yemen speaks the Arabic language with the Sanani Arabic dialect.

Does Yemen have 2 capitals?

The main capital of Yemen is Sanaa and since 2015 the Houthis attacked so, the government of Yemen made Aden the temporary capital due to the circumstances.