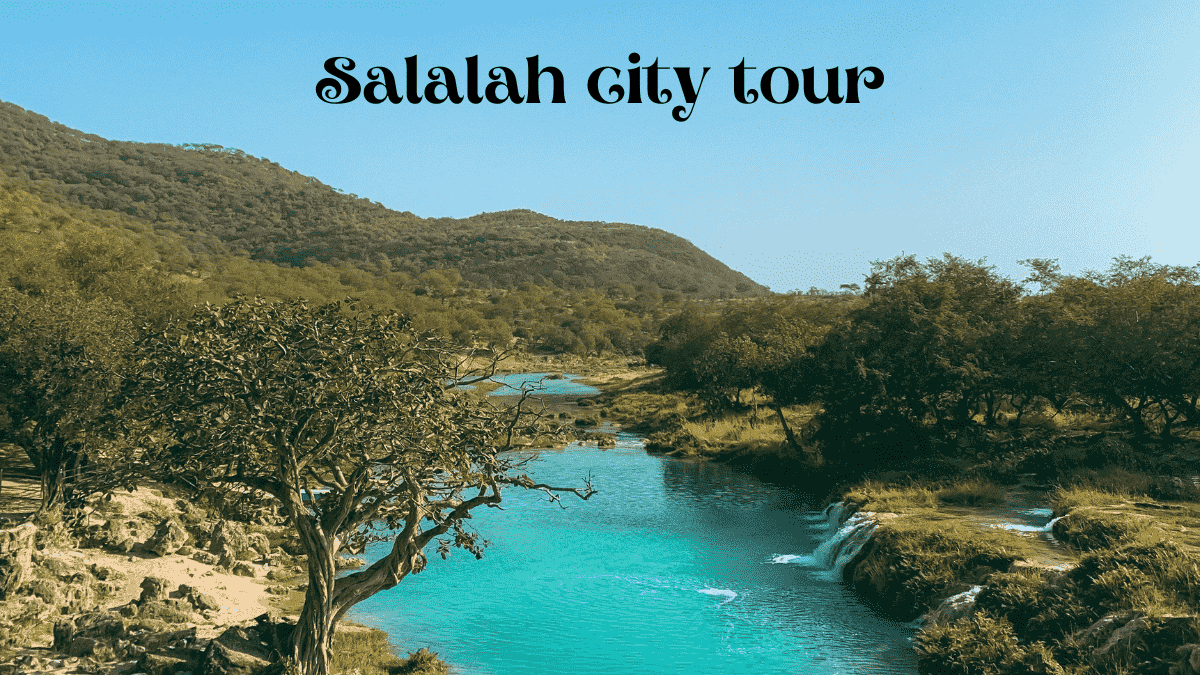 Salalah city is one of the most beautiful cities in the Arab countries that have a wonderful landscape that is worth visiting, so we will tell you about Salalah city tour.

In addition, Salalah has amazing weather that attracts many tourists from all over the world. Besides, it has a great history that dates back to 2500 AD and was a centre for inhabitants for many years in the sultanate of Oman.

Moreover, Salalah has many interesting festivals that you must visit to enjoy its culture and art.

Let’s have a Salalah city tour to get to know more about this Arab city.

Salalah is characterized by its ancient history, as the archaeological study referred to the history of Salalah, where archaeological writings and inscriptions were found. In addition, these inscriptions prove that Salalah passed through more than one successive civilization.

To this day, Salalah still plays an important role as it is one of the administrative and cultural cities of Dhofar Governorate. The distance from Salalah to Muscat is 1023 km.

The reason for Salalah name

Many have tried to explain the meaning of Salalah, which is the plural of salah, which denotes dew and little water. It is also called the land that has dew because the prayer also means dust.

The location for Salalah

Salalah is located on the southern coast of Oman, overlooking the coast of the Arabian Sea. It is also distinguished by the fact that it is surrounded by mountains on all sides.

The population density in Salalah is 293,962 people, according to 2020 statistics.

It is one of the most important ports in the Gulf, as its location makes it a link between the continents of Asia and Europe due to the proximity of their navigational paths to the port. Therefore, it is one of the main ports for the exchange of containers and is located in the south of the Sultanate of Oman in the Dhofar Governorate, in the state of Salalah, in the Raysut region.

Salalah has a beautiful climate, which attracts tourists to it.

The spring season starts from March until May and does not exceed 30 degrees.

The summer season starts from June to October, and the temperature ranges from 24 to 30 degrees.

The Autumn season starts from June to September and by low temperatures.

The winter season starts from October to April, and the temperature ranges from 20 to 27 degrees.

You can visit Salalah all year as the weather is good but the best time to visit Salalah is between June and August as the autumn season is the best weather you can enjoy a lot in Salalah. Don’t miss this chance.

Salalah International Airport is the main airport which receives many flights from all over the world. Besides, Salalah airport code is SLL.

What to do in Salalah?

It is one of the most famous festivals ever, as it crowds many visitors. It takes place from July to September, so you can enjoy folklore as well as cultural performances. In addition, there are poetry evenings and concerts by the most famous foreign and Arab singers.

The festival also includes a book fair, in which the largest number of valuable books that you can purchase are displayed.

It is one of the best places to visit in Salalah, and it is also called Fort Market. The fort is located next to the Sultan’s Palace overlooking the beach, in addition to having many beautifully arranged markets. You can shop at the Hafah souvenir market, and there are also the finest types of incense and perfumes.

It is one of the main mushrooms of Salalah, and you will also find huts that sell coconut drinks and other special drinks. You will enjoy the taste of the outdoors.

If you are a fan of horseback riding, you can enjoy the best types of horses in the green fields of Salalah as well as the beaches. There are also stables that organize excursions in the desert.

Salalah has many famous beaches such as:

It is considered one of the best beaches, as it is characterized by picturesque nature and has an extension in the clear blue waters. In addition, it is very popular among the locals. It also has cabanas where you can enjoy a grilled lunch on the beach.

You can enjoy the picturesque nature, as to reach the beach, you will take a winding path paved over the mountains. You will enjoy the amazing sand and rocky terrain.

This beach is characterized by coconut trees that line the white sandy shore.

There are many hotels in Salalah, the best are such as:

In conclusion, Salalah city tour is worth doing and enjoy your journey by visiting the festival. Besides, you can enjoy nature and the various beaches. Don’t miss this chance.

Why is Salalah famous?

Salalah is famous due to its nature and weather as well which make it the best destination during the year.

Is it worth going to Salalah?

Salalah is worth the visit as it has many unique landscapes and beaches; in addition, there are festivals and a great atmosphere to enjoy.

When should I go to Salalah Oman?

You can visit Salalah all year, but especially in autumn from June to August, the weather will be perfect for a visit.