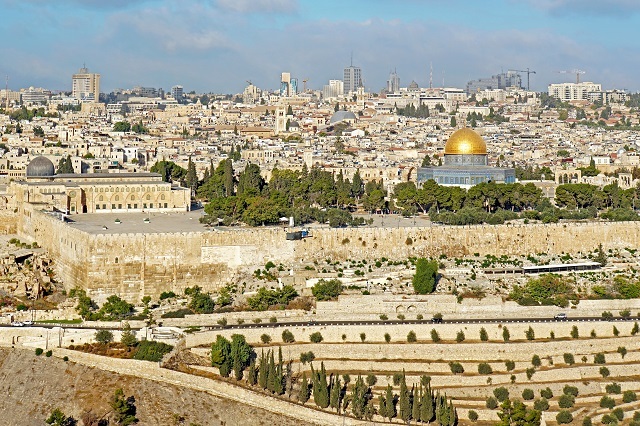 The oldest name of the city of Jerusalem is Jebus, then called Oorchalm name, or the city of Shalem, [1] and therefore the historical sources have proved that Jerusalem bore multiple names, including Zion, Aorchalaam, and Yerushalaim, these labels are not Hebrew or Jewish, but they are the names of Canaanite and Jerusalem was famous for it before the coming of the Israelites, and it is likely that the name Jerusalem has many interpretations, including the following:

Zionists give modern names to the city of Jerusalem, including the following:

Unified Jerusalem: This name refers to East and West Jerusalem, and they insist that Jerusalem is the capital of the State of Israel, and the Zionists are based on their propagated beliefs, which market Jerusalem on international maps as a united Jerusalem, or it is satisfied with the word Jerusalem.

Greater Jerusalem: This name reflects the malice of the Zionists, as they mean the expanded Jerusalem, which the Zionists try to absorb the Arabs residing in Jerusalem according to their small percentage, compared to the Jewish majority in the eastern city of Jerusalem.

A historical overview of the city of Jerusalem

A city seen Al-Quds was a long-established historical birth, as humans inhabited it since the time of the early days, so before 3500 BC, it was inhabited by the Jebusites who belong to the stomachs of the Canaanite Arabs from the Arabian Peninsula, and history has been agreed that the oldest name for Palestine is the land of Canaan,
which is attributed to the Canaanite Arabs who lived in it, then the Jebusites responded to the fierce attacks from the Jews, and most of their goals were from that to seize Jerusalem, but their attempts were unsuccessful, as the Arabs were able to live in Palestine, and the Arabs are considered the original inhabitants of Palestine, and the tribes of Benjamin and Judah lived with them, and then the children of Israel were baptized to remove the Arabs from their countries, and all their attempts did not succeed, and the Arabs continued to rule Jerusalem for a period of time, and it remained under Arab control until the era of the Prophet of God David, peace be upon him, and he was the one who conquered Jerusalem, and after his death, his son Solomon, peace be upon him, completed the construction of the Temple that his father started building It should be noted that this temple collapsed and its features disappeared, but the JewsThey still believe it exists, but it is a false pretense structure