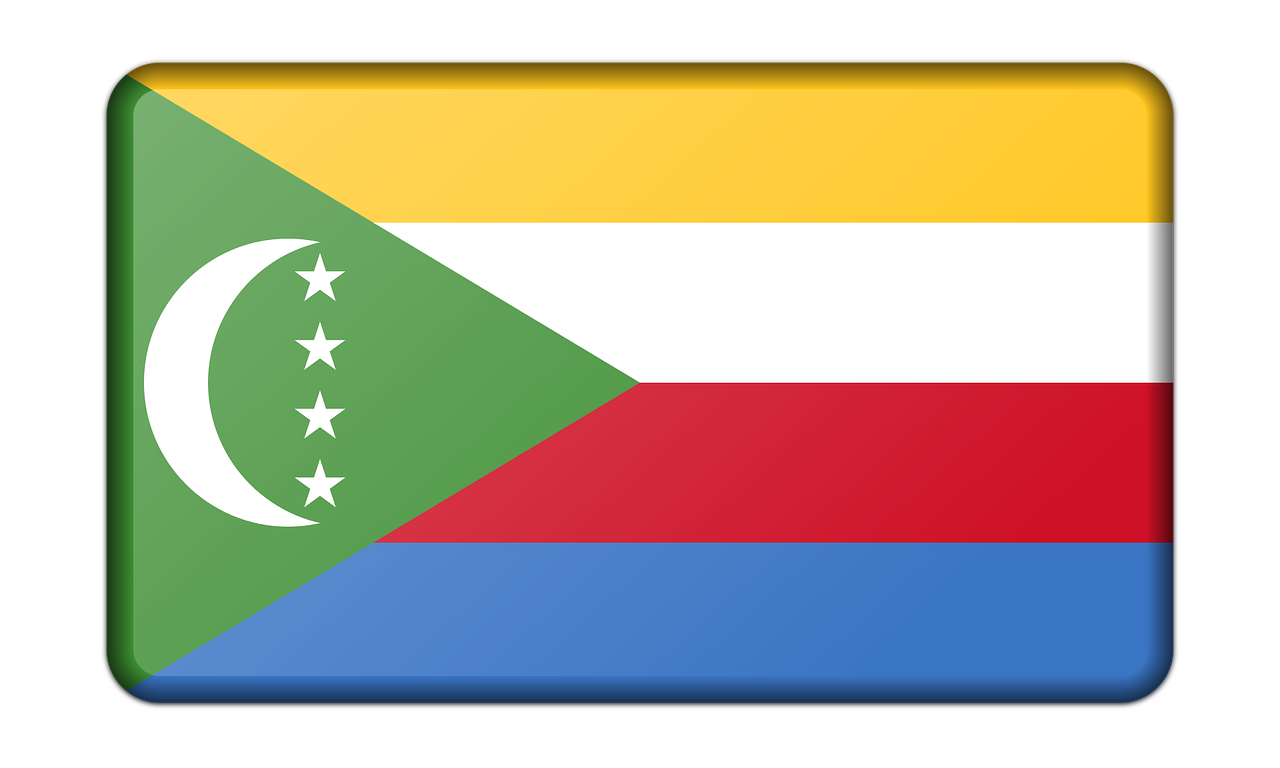 The Republic of Comoros is located in the Indian Ocean, between the shores of Tanzania, Mozambique, and Madagascar.

It is an archipelago consisting of four islands off the coast of East Africa. Furthermore, the three of them are independent islands belonging to the Republic of Comoros.

What is the capital?

Moroni is its official capital.

It is the fourth island is the island of Mayotte, which is under the administration of France.

What is the cultural heritage of the Republic of Comoros?

In addition, the cultural heritage of the Republic of Comoros comes from the continent of Africa, the Middle East, and Europe.

Most of the people are Muslims with a percentage of up to 98% of the total population.

What is the population in Comoros?

Flag of the Republic of Comoros

The Republic of Comoros adopted the final shape of its flag in 1993 AD.

The four bars and the four stars are the main islands for instance:

Thus, The green color and the star and crescent symbol are traditional symbols of the Islamic religion.

The climate of Comoros

It has a tropical climate. Therefore, the annual average temperature in the coastal areas is about 25-26 °C. A slight difference with the altitude per 100 m by about 0.6-0.7 °C.

In addition that the annual rainfall in the coastal areas is 1,000 mm, thus the rate of precipitation increases in high areas.

Moreover, The climate during the months from November to April is described as a hot climate with continuous rainfall.

During the months from May to October, the climate is dry and cold. Thus, Every 10 years, It is exposed to severe hurricanes that cause serious damage.

Landforms of the Republic of Comoros

It formed some coasts of round rocks, and some the other flows of lava.

In addition, it is the origin of the activity volcano that has occurred in the Indian Ocean seabed.

The four components of the Republic of Comoros:

It is the largest island in the archipelago and is located along its western coast, the capital, Moroni.

So, the island is the highest among the four islands.

Furthermore, near its southern end, there is the highest point in Comoros, represented by Mount Karthala.

Mount of Karthala with a height of 2,361 meters, is a volcano.

It has exploded more than 12 times during the past two centuries.

Besides to the north of the mountain extends a wide plateau with a height of up to 600 meters.

The land of Grand Comore is generally described as rocky and its soil is shallow.

One of its most famous cities is the city of Mitsamiouli, located on the northern coast.

It is the smallest island in the archipelago.

Additionally, it consists of a plateau with an average height of 300 meters.

Furthermore, the island extends in the western part of it a series of hills. These hills are with a height of up to 790 meters above sea level. Among the most famous of its cities is such as:

This island is characterized by its triangular shape.

Besides, in the middle rises Mount Ningwe.

This mountain height is up to 1,580 m, which is a volcanic massif. Mutsamudo is located on the northwest coast.

It is the oldest island in the archipelago.

It is located southeast of the island of Anjouan, however, it is still under the French administration.