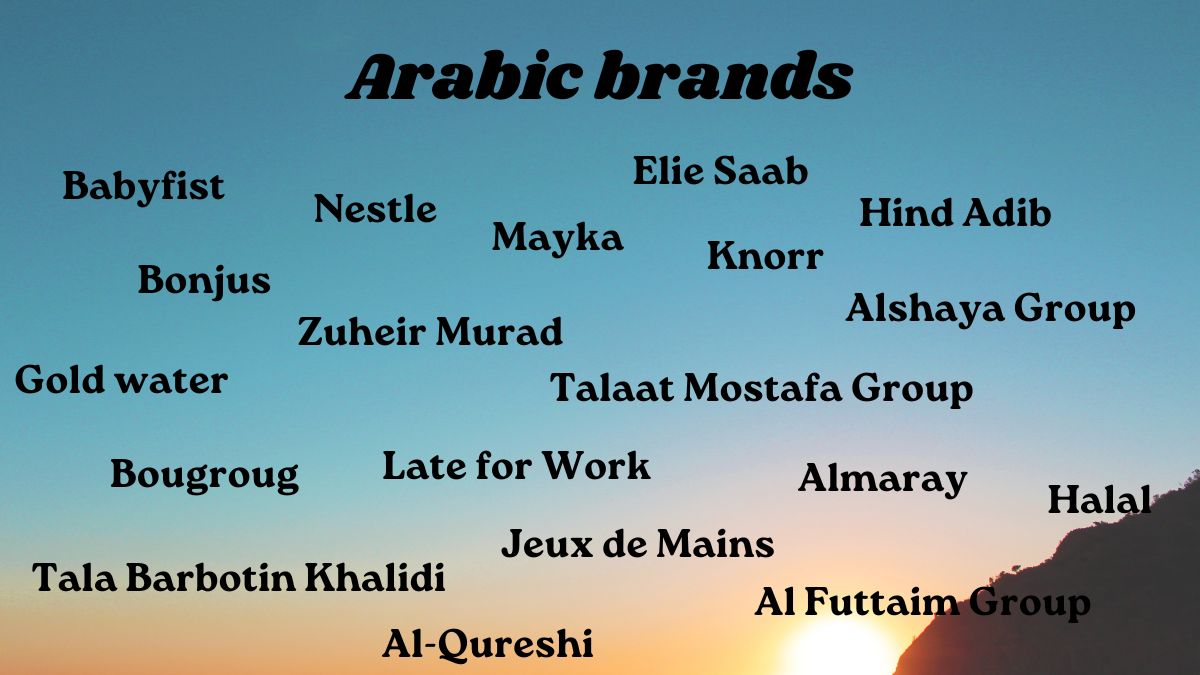 Arabs have succeded in many fields and have created many Arabic brands that have become famous in the whole world, so we will tell you about successful Arab brands in many areas of life such as Arab clothes and designers, food, and products with the Arab brand, in addition to Arab perfumes.

There are many Arab designers who have become very famous in the Arab world as well as in the whole world because of their high creativity and precision in their wonderful designs. Among the most important of these Arab brands are:

Elie Saab is one of the Famous Middle Eastern fashion designers. He was born in Lebanon in 1964, and since his childhood was fond of drawing designs and cutting fabrics. He has now become one of the most famous designers in the world, where he designed many dresses for major Hollywood stars such as Angelina Jolie. Therefore, he became famous all over the world and has many exhibitions around the world. In addition, he designed his own perfume in 2015 and was named Elie Saab perfume. He now has an atelier in Lebanon as well as in Paris and Milan, the fashion capital. Besides, he is famous for his Luxury Arab brands.

Zuhair Murad is a Lebanese designer who is aware of his designs that attract the eye. Therefore he is one of the famous Luxury Arab brands He became famous in Lebanon with the most famous artists such as Elissa, Haifa Wehbe, and Nancy Ajram, but then he went international, where he did many private ateliers in Paris. In addition, he has designed many dresses for international artists such as Kim Kardashian, Paris Hilton, Jennifer Lopez, Taylor Swift, and Christina Aguilera, and many international artists. Thus, he made himself famous worldwide on a large scale and his ateliers in Italy. So, he became one of the Famous Middle Eastern fashion designers.

Abed Mahfouz is a Lebanese fashion designer born in 1956. He started his career in fashion design in Beirut and then went international. He had high creativity and sincerity in his work, which helped him reach the world. In addition, he has designed costumes for many international celebrities such as Selena Gomez. He joined Alta Roma and launched several glamorous wedding dress collections. He now has an atelier in Rome and also in City walk in Dubai where a lot of people from all over the world come to it.

He is considered one of the most famous Egyptian designers who has won many international and Arab awards. In addition, his talent appeared in childhood and he joined the College of Fine Arts, which helped in polishing his talent. In addition, he has done many creative designs for many famous artists such as Yousra, Laila Elwi, and Elham Shaheen. And also he designed for many other international actresses as well.

It is a famous Arabic brand created by Tala Barbutin Khaldi in partnership with Syrian and Lebanese designers. In addition, it has an interest in creativity and the production of a unique and unparalleled fashion line. So he has great Arab fame. It became one of the Famous Arabic brands.

It is an Arab clothing brand that is designed clothes by an Egyptian designer named Mai Orvi who lives in Dubai and is very famous in the Arab world. In addition, it has unparalleled creativity. It is one of the famous Arab brands.

Babyfist (one of the famous Arabic brands)

It is a Palestinian brand focused on creativity, where every design has a statement that supports women. In addition to her attractive designs, she has a lofty message, which is to support women in the world, which gives her design her goal, which is a distinguished and classy look for women.

It is a Moroccan brand which is an Arab-owned brand characterized by its distinctive designs inspired by the Arab Maghreb, which contributed to its fame in the Arab world. In addition, it is distinguished from the rest of the Arab brands with simplicity and beauty at the same time.

A late-work brand is an Arab-owned brand which is a Moroccan brand, which is distinguished by its designs and creativity. It has unique, unparalleled designs. It has become widely known in the Arab world, as it is one of the most famous Arab clothing brands.

Jeux de Mains (one of the famous Arabic brands)

It is one of the Arab-owned brands created by the Lebanese designer Salim Cherfane. It features a variety of designs suitable for sale, fun, movement, and many occasions. Therefore, it spread in the Arab world and became famous among Arab brands.

It is an Arab brand that was established in the Emirates and started its first stores in Dubai and from there to all Arab countries after its resounding success. It features a variety of designs and bright, distinctive, and modern colors.

There much lovely perfume Arabic brands that you will not imagine its beauty and inspiration effect. There are many brands such as:

There are many famous companies that are playing a prominent role in the economy of the Arab world. Besides, it contributes to supporting the local industry. These companies are many such as:

In conclusion, Arabic countries have many Arabic brands and companies that have been very successful businesses. All these brands contribute to the Arabic industry and economy for its development in all aspects of life.