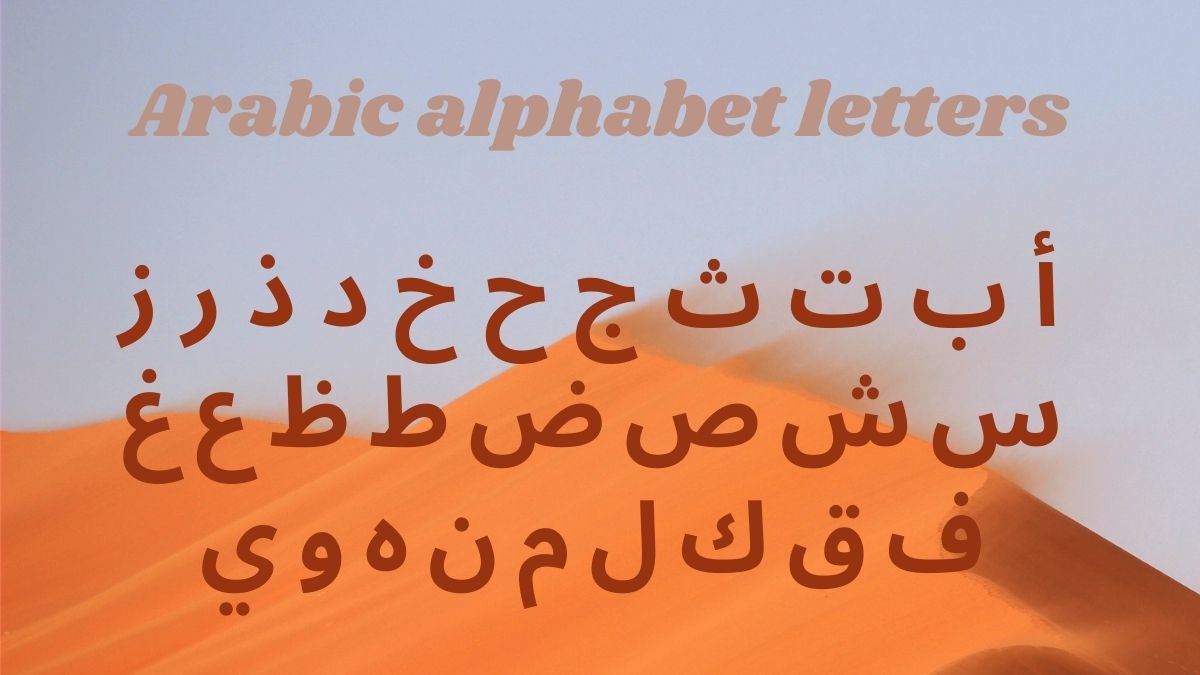 Arabic alphabet letters are one of the most valuable letters in the world due to having retained the same origin. And also pronunciation throughout the ages. Several factors contributed to this, the most important of which was the Holy Quran and also the spread of Islam. In addition, The Arabic language has distinctive sounds that are unparalleled in other languages.

In 1973, the Arabic language was adopted by the United Nations as an approved language among the six international languages, namely Arabic, English, French, Chinese, Russian, and also Spanish.

It is called the “Arabic alphabet” and it is still called this until now in addition to the Arabic letters. In addition, it has been called Arabic because recent studies have proven that it is named after the first person who pronounced it, Yaarib Ibn Kanaan. Therefore, there are origins of the Arabic language from the Canaanite language and then developed into the Arabic language.

Spread of the Arabic alphabet

Islam contributed greatly to the spread of Arabic letters for many reasons such as:

First: The strength of Islam and also a large number of Islamic conquests.

Second: Many people around the world embraced Islam as a result of Islamic conquests and its tolerant principles.

Third: The need to understand the Noble Qur’an, in addition, to the Qur’an in its own language as well.

Fourth: The Arabic language is the language of the Noble Qur’an, so God preserves it from any distortion.

Fifth: It was a language specific to the Arabs and also became specific to all Muslims in various parts of the world.

Sixth: Because it has many different

All Arab countries joining the League of Arab States use Arabic as their national official language such as:

There are many languages in the world that use the same letters of the Arabic alphabet but with differences in the formation of words and sentences from the Arabic language, such as Sindhi, Punjabi, Urdu, Ottoman, Kurdish, Malay, Persian, Kurdish, Baluchi, Urdu, Pashto, Uyghur, Chinese (Xuercheng), Lunar.

Features of the Arabic alphabet

How many letters are in the Arabic alphabet?

The Arabic language has 28 letters, and sometimes the letter “ء” is added to them, so they became 29.

Arapic alphabet area unique letters with unique sounds such as:

Arabic alphabetcal order is such as:

It is an arrangement on the historical origins where it begins with the Semitic letters such as:

The six letters that were added in the Arabic language are added to them such as:

It is the main arrangement such as:

It is the arrangement that is currently used, as it is arranged according to their similarity, which is what is used now in most dictionaries and books.

There are 5 exits for the sounds of Arabic letters, such:

Middle throat such as “ع, ح”

2. Tongue: It includes ten special exits as the following:

To pronounce many letters through the tongue, whether it is from its root. sometimes from the middle and also its edges. It includes letters such as ج, ش, ي, ت,ط, د, ث, ظ, ذ, ن, ر, ز, ص,س, ض, ل.

4. Back of the Jaw: It includes one special exit that results in three sounds such as آ, ي, و

5. The gills: It includes one special exit.

The 28 letters of the Arabic alphabet are consonants and also they are as the following:

The Arabic language has some advantages that enable the translation of foreign languages or their phonetics with simple changes in the letters of the Arabic alphabet, such as

In conclusion, the Arabic language has become the heritage and ancient civilizations of the Arab peoples, and also the whole world seeks to study its history and civilizations that bring tourists from around the world. In addition to the role of Arab science and literature, which has translated many Arabic books by great Arab scholars and writers in various fields into many languages ​​around the world. Therefore, the Arabs are proud of the Arabic language, the language of the Noble Qur’an.