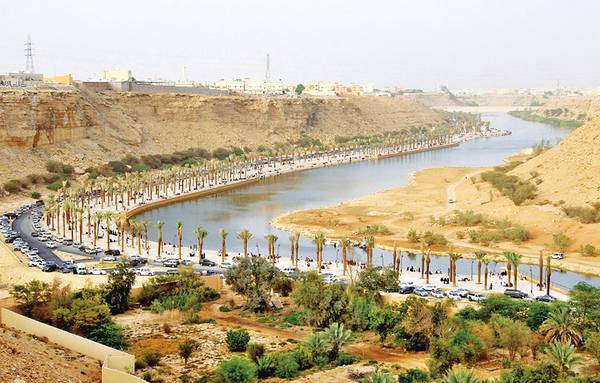 Wadi Hanifa enjoys a distinguished geographical location in the continent of Asia, specifically in the Kingdom of Saudi Arabia, as it is located in the middle of the Najd plateau near the capital, Riyadh.

Importance of the location of Wadi Hanifa

The significance of the Wadi Hanifa site lies in the following:

Wadi Hanifa constitutes a geographical location with a beautiful and picturesque nature, and extends over a large area from the northwest to the southeast of the capital Riyadh. The valley has become the largest natural reserve in the Kingdom. It also includes water channels, sites to observe the landscape, and pedestrian paths; Which led to encouraging investment, and attracting tourists from inside and outside Saudi Arabia.

The presence of a waste water treatment system

A sewage treatment plant has been established in the valley with an average of 400,000 – 650,000 m3 of surface water per day; This led to the formation of an area with small lakes in the south of the capital, Riyadh.

Wadi Hanifa represents a historical site that dates back to the pre-Islamic period. It is known as Wadi Al-Ard. Later it was called Wadi Hanifa in relation to the Hanifa tribe that inhabited the valley at the time of the Prophet Muhammad, peace and blessings be upon him. It was also called the Fertile Valley in ancient times. The proportion of its fertile soil suitable for agriculture, as a result of the heavy rainfall in it.

The valley includes a group of open gardens such as; Elab Dam Park, which contains pedestrian paths for visitors to the park, in addition to the park containing 93 areas designated for visitors to rest,
The valley also includes the Wadi Hanifa Dam Park, which includes 27 rest areas and a corridor that extends over a distance of 5.6 km, in addition to containing the Factories Garden, and other gardens and parks.

The climate of Wadi Hanifa is characterized by the following: