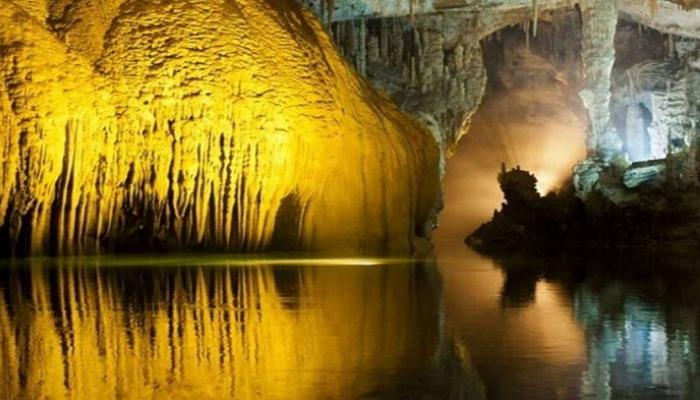 The name of the cave changed many times; In the beginning, it was called “The Caves of the Dog River”, in
reference to the name of the river that passes through the caves, and later it
was known as Djita, then Jeita, and
finally Jeita, and the word Jeita means in Aramaic “roaring water”, and in 1927 the
name was transferred from Caves of
Nahr El Kalb to Jeita Caves.

Structure and installation of Jeita Grotto

The Jeita Grotto in Lebanon consists of two separate caves, but they are interconnected; The lower cave is characterized by the nature of the river
water running in it, while the upper cave is characterized by amazing rock
formations, as it contains one of the largest suspended stalactites in the world, which is 8.2 m long.
When visiting the cave, the visitor begins his way to the lower cave through the
boat, which moves the visitor from the sound of the rush of water and air to the deep silence inside the cave, and the visitor can see the structures and columns inside that cave through the
lighting system in it.
It is noteworthy that the height of the
lower cave reaches 6,200 m, while the visitor is allowed to visit the upper cave
on foot, with a length of 2,130 m, but the distance allocated to visitors is only 750 m.